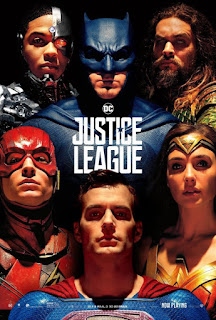 Justice League is a 2017 superhero film officially directed by Zack Snyder, but completed by director Joss Whedon.  The film is based on the DC Comics superhero team, the Justice League of America, that first appeared as a group in the comic book, The Brave and the Bold #28 (cover dated: March 1960).  Justice League is the fourth film in the DCEU (DC Extended Universe) film series.  Justice League the film sees a group of allies slowly come together to face a threat to Earth.

Justice League introduces a being named “Steppenwolf” (voice of Ciarán Hinds).  Thousands of years ago, Steppenwolf and his legions of “Parademons” tried to take over the earth using the combined energies of three “Mother Boxes,” but he was defeated.  In the present, it is two years after the death of Superman (as seen in the film, Batman v Superman: Dawn of Justice), and his death has apparently triggered the reactivation of the Mother Boxes.

Now, Steppenwolf has returned to Earth, and although he is unaware of Steppenwolf, Batman/Bruce Wayne (Ben Affleck) knows that something is wrong because he has been battling the scattered Parademons that have been appearing in Gotham City and elsewhere.  Batman also knows that what is happening is too big for him to fight alone, so he has begun the difficult task of finding and recruiting other “metahumans” (superheroes) into a team that can take on the biggest threats to Earth.

Wonder Woman/Diana Prince (Gal Gadot) is familiar with Steppenwolf and is ready to unite.  The new young hero, Flash/Barry Allen (Ezra Miller), is more than happy to be part of a team.  However, the mysterious undersea metahuman, The Aquaman/Arthur Curry (Jason Momoa), brushes off Batman.  Woman Woman approaches the techno-organic metahuman, Cyborg/Victor Stone (Ray Fisher), whose powers and abilities are constantly evolving, but he also brushes off the idea of joining Batman and Wonder Woman's cause.

Even if Batman, Wonder Woman, and Flash can convince Aquaman and Cyborg to join, their powers may not be enough to stop Steppenwolf and the Parademons.  They need Superman/Clark Kent (Henry Cavill), but he is dead.  So can this “Justice League” change that?

Zack Snyder's first two films in the DCEU film series, Man of Steel (2013) and Batman v Superman: Dawn of Justice (2016), are interesting films.  Man of Steel contains moments of true beauty and is an imaginative and poignant retake on the story of Superman.  Batman v Superman is filled with great moments and has several brilliantly-staged action set pieces.  However, both films are at time foolishly bombastic and bombastically foolish.

Zack Snyder began production on what was to be his third DCEU film, Justice League, in early 2016, but left the film in May 2017 in order to deal with the aftermath of the death of his daughter.  Warner Bros. Pictures brought in Joss Whedon to finish the film.  Whedon is beloved in fandom because he is the creator of the long-running “Buffy the Vampire Slayer” television series.  He also wrote and directed two films for Marvel Studios, Marvel's The Avengers (2012) and Avengers: Age of Ultron (2015), each of which grossed over a billion dollars in worldwide box office.

Whedon apparently changed the story that Zack Snyder's version of Justice League would have told – to some extent.  I have read that as much as seventy-five percent of the Justice League film that reached movie theaters in late 2017 is the result of Whedon's reshoots of the film.

The result is a film that does not move or sound like either Man of Steel or Batman v Superman: Dawn of Justice, nor does it have the genuine sense of superhero team dynamics, conflict, and melodrama that Whedon's Avengers films have.  Whedon's Justice League is neither bombastic nor foolish.  It is a collection of crescendos that fade away.  Justice League seems like a collection of loosely connected subplots and action scenes taken from another movie and stuck together to make a new blasé movie.

In Justice League, the dialogue is mostly awful.  All the emotions (grief, exhalation, anger, etc.) seem forced or outright phony.  The actors struggle with the mediocre character writing; sometimes, it gets so bad that it seems as if they are struggling to act.  Steppenwolf is a scary villain that is played as comically histrionic.  Also, the film treats the obviously dangerous Paramdemons as nothing more than props to be destroyed by the powers of the members of the Justice League.

There are a few good moments in Justice League.  The revival of Superman and the subsequent battle between the League and the Man of Steel is genuinely intense.  Every time I watch it, my attention is glued to the screen.

Justice League is not a bad movie; it doesn't have the gumption to be good or bad.  It is a movie that is without a heart, and it comes across as nothing more than an assembly line product put out to benefit a movie studio financially.  It certainly was not put out to truly entertain the audiences that wanted to be entertained by it.  Zack Snyder's version of Justice League will make its debut as Zack Snyder's Justice League on the HBO Max streaming service soon (as of this writing).  Perhaps, it would have been better that Justice League been delayed than it be released in 2017 as a mostly flavorless misfire.