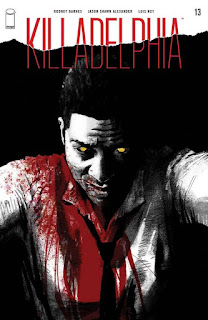 “Home is Where the Hatred Is” Part I: “Family First”

Killadelphia focuses on James “Jim” Sangster, Jr., who comes home to Philly to deal with the final affairs of his recently murdered father, revered Philadelphia homicide detective, James Sangster, Sr.  Not dead, but undead, the father joins the son, the chief medical examiner (Jose Padilla), and a rebellious vampire to lead the battle that saves Philly from the vampires.  But that was just the first battle, and this is a war.

Killadelphia #13 (“Family First”) opens in Los Angeles, where another undead former President of the United States confesses his sins, announces his plans, and re-introduces his family.  Elsewhere, John Adams, our nation's second president finds that his wife, Abigail Adams, the vampire queen in control of legions, no longer needs him.  Philadelphia will fall at her feet.

Meanwhile, in the wake of the shocking events that closed the last issue, James, Sr. seeks help from Tevin Thompkins a.k.a. “See Saw,” but the young man is busy with his own revolution.  Will he help, or will the help come form an unexpected guest?

THE LOWDOWN:  Killadelphia begins its third story arc, “Home is Where the Hatred Is.”  After the pyrotechnics of the previous story arc, “Burn Baby Burn,” this new story line looks to focus on family – damned and otherwise.

Good one, Rodney!  Seriously, Killadelphia's scribe, Rodney Barnes, has managed to keep this series extra-fresh for over a year.  Dear readers, I have rarely had a chance to doubt this series, as Barnes' imagination presents vampire fiction that offers layers, subtext, and alternative views of much of the supernatural that defy the bonds and boundaries of vampire fiction.

Killadelphia #13 is a welcomed return.  One of the best horror comic books out today is back in black and red, and I highly recommend it.  I think you will like it.  I'd stake a vampire on it.


Killadelphia #13 has a backup feature:
“Elysium Gardens” Part 6 “The Wake of the Wind”

The back-up feature, “Elysium Gardens,” opens in Philadelphia, May 1st, 1985.  Angela/Zubiya and her pack of werewolves have arrived, looking for someone.  They have found their prey, Stregherian witch, Tituba, among the Black liberation group, M.O.V.E.  And Tituba has a history, or rather, her story to tell.

As he does with Killadelphia, writer Rodney Barnes makes “Elysium Gardens” both allegorical and metaphorical in the way he uses the brutality, savagery, barbarism, greed, and sin of white supremacy, racism, white colonialism, and white settler violence in the character, setting, and plot of his stories.

It is as if the spirits of the ancestors are guiding Barnes' hands.  Just over a month ago, media reports revealed that the remains of a child of M.O.V.E. were being used in a Princeton-back online forensic anthropology course – reportedly without the permission of her relatives.  Is it a coincidence that Barnes has introduced the organization into this narrative now?  I think not; the ancestors move in mysterious ways.

The art by Chris Mitten is a nice change of pace.  Mitten captures the emotions and the spirit that resides within the characters' eyes.  His graphical storytelling is good for “Elysium Gardens.”