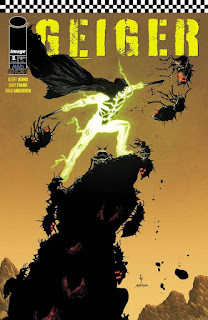 Geiger #2 opens with a flashback into Tariq's past life.  Then, the story moves fully into Las Vegas.  There, a waitress in the fiefdom of Camelot has a plan to save her children – her older child, daughter Hailee, and younger child, son Henry – from the perverted desires of the thugs that rule Camelot.

Carolina's plan involves a powerful relic from before the war.  Will this relic bring hope or finish what the war started?  It depends on who gets Carolina's prize – the “Casino Warlords of Las Vegas” or the monster called Geiger.

THE LOWDOWN:  As first issues go, Geiger #1 was mostly an introduction, kind of like a prologue.  It introduced the title character, Geiger, giving readers a look at who he was in the past and a glance at who he is now.  Honestly, Geiger #1 was not Geoff Johns or Gary Frank's best work.

Still, I was intrigued by the concept, and Geiger #2 starts to deliver on the series' potential.  I thought that once writer Geoff Johns took readers into Las Vegas the intensity would rise, and it does.  If Geiger is the hero of Geiger the comic book, Las Vegas, in the form of “Casino Warlords,” will be the source of the villains and adversaries.  From what we see of Vegas, I think Johns is promising lots of conflict and action-driven drama.

In Geiger, Frank's pencil art is rougher and less refined than his usual work, which, as I wrote before, is a good thing here.  Geiger is dark, and perhaps, it will be apocalyptic, so with colorist Brad Anderson, Frank is preparing us for action, but not the shiny, superhero kind.  I think I should keep following Geiger … for the time being.

Posted by Leroy Douresseaux at 5:03 PM