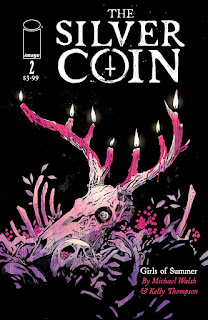 The Silver Coin is a new horror comic book anthology and miniseries published by Image Comics.  It is the creation of artist Michael Walsh and writers Ed Brisson, Jeff Lemire, Kelly Thompson, and Chip Zdarsky.  Each issue of this five-issue miniseries will tell a tale of terror that is set in a supernatural world in which the mysterious “Silver Coin” changes the lives of those who take possession of it.  The second issue is written by Kelly Thompson and drawn, colored, and lettered by Michael Walsh.

The Silver Coin #2 (entitled “Girls of Summer”) opens in 1993.  Fiona “Pickle” Watterman is excited about attending a girls' summer camp, especially because she is a fan of slasher horror movies.  Maybe, a killer will attack the camp, and Fiona will be prepared to fend off the killer because of her knowledge of horror movies.

What Fiona is not prepared for is how idyllic the camp is... or for sharing a bunkhouse with a bunch of mean girls (bitches)... or for an encounter with the silver coin.  Now, will Fiona's time at a summer camp become the stuff of horror movie legends?

THE LOWDOWN:  As I wrote in my review of The Silver Coin #1, I am a big fan of horror comic book anthologies.  That includes everything from the classic EC Comics titles to later titles like DC Comics' Ghosts and House of Mystery, Kitchen Sink Press's Death Rattle, and Approbation Comics' Amour, to name a few.

“Girls of Summer,” the offering in The Silver Coin #2, moves away from classic ghost and monster stories.  It reads like an urban legend about an unwary teen who strays too far from the safe confines and wanders into a dark corner of reality.  Writer Kelly Thompson offers in “Girls of Summer” a story that is like a blend of an episode of “The Twilight Zone” television series and twenty-first century gory horror movies.

I enjoyed the story, “The Ticket,” from the first issue of this series a little more than I do “Girls of Summer.”  This time, the arrival of the cursed silver coin feels a little like an insertion for the sake of the series' title.

However, Michael Walsh's art and graphical storytelling deliver an unsettling tale that captures the awfulness of Fiona's fellow campers and the severe isolation that Fiona feels.  Walsh splashes color like a madman, which revs up the intensity of the second half of “Girls of Summer.  Walsh will certainly make readers pay attention.

The Silver Coin #1 and #2 have made me … hungry for more.  And I still feel very confident in highly recommending this comic book series to you, dear readers.