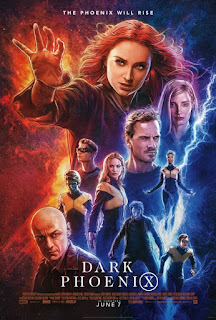 Dark Phoenix is a 2019 superhero movie from writer-director Simon Kinberg.  It is 20th Century Fox’s twelfth film based on Marvel Comics’ X-Men comic book franchise.  This movie is also a sequel to X-Men: Apocalypse (2016).  In Dark Phoenix (also known as X-Men: Dark Phoenix), one of the X-Men begins to develop incredible powers that will force the rest of the X-Men to decide if this one mutant's life is worth more than all of humanity.

Dark Phoenix opens in 1975 and introduces eight-year-old Jean Grey (Summer Fontana) and depicts the automobile accident that changes her life and brings Charles Xavier/Professor X (James McAvoy) into her life.  Then, the story moves to 1992 and to Xavier's School for Gifted Youngsters.  There, Xavier has turned the X-Men into what some describe as a team of superheroes that steps in to protect and help mankind when no one else can.

The latest emergency involves a distress signal from a recently launched space shuttle, which has been critically damaged by a solar flare-like energy.  Xavier sends his strike team, “the X-Men”:  Hank McCoy/Beast (Nicholas Hoult), Raven/Mystique (Jennifer Lawrence), Peter Maximoff/Quicksilver (Evan Peters), Jean Grey (Sophie Turner), Scott Summers/Cyclops (Tye Sheridan), Kurt Wagner/Nightcrawler (Kodi Smit-McPhee), and Ororo Munroe/Storm (Alexandra Shipp) to rescue the astronauts aboard the space shuttle.  Raven goes along on the mission, but she is furious that Xavier puts his students in danger for the rest of humanity, which she still regards with suspicion.

The X-Men arrive in their jet, the Blackbird, to find the situation rapidly deteriorating and the strange energy mass approaching the shuttle.  While saving the astronauts, Jean is struck by the energy and absorbs it into her body.  This apparently helps her to miraculously survive the blast of the shuttle explosion.  The X-Men and Xavier's other students start calling Jean “Phoenix” because of her miraculously survival.

However, the result of absorbing that energy causes Jean's psychic powers to be greatly amplified.  In turn, that causes her emotional state to begin to deteriorate, leading to tragedy.  Soon, the X-Men are hunting Jean Grey, and so are the X-Men's adversary/rival, Erik Lensherr/Magneto (Michael Fassbender), and also the U.S. military.  Vuk, the leader of a shape-shifting alien race known as the D'Bari, is also searching for Jean, specifically for the power Jean harbors inside her.  Can Xavier and the X-Men save Phoenix, or will their act of salvation doom humanity?

Both film adaptations of the classic X-Men comic book story arc, “The Dark Phoenix Saga,” 2006's X-Men: The Last Stand and 2019's Dark Phoenix, fail to approach the riveting melodrama and enthralling soap opera that readers found and continue to find in Marvel Comics's The X-Men #129-138 (publication cover dates:  January to October 1980).  The writers of both films alter the core original story – to the movies' detriment.

Writer-director Simon Kinberg apparently directed some of 2014's X-Men: Days of Future Past and much or most of 2016's X-Men: Apocalypse, although Bryan Singer is credited as the director of both films.  I consider both films to be disappointments, one more than the other.  True to form, Simon Kinberg delivers in Dark Phoenix a film that is mostly a dud.

The storytelling feels contrived, and the screenwriting offers laughable concepts, especially the entire D'Bari alien subplot; that's just some stupid shit.  Dark Phoenix is one of two final films in 20th Century Fox's X-Men film franchise (the other being the long-delayed The New Mutants, which was finally released in 2020).  I say that Dark Phoenix is deeply disappointing, but honestly, I did not expect much of it, from the moment I first heard that it was going into production.  In fact, this film is a devolution from the franchise's peak, which was released 16 years prior to Dark Phoenix, the fantastic X2: X-Men United (2003).

Even the acting is bad.  Playing Vuk the alien is the lowest low point of Jessica Chastain's career, which includes two Academy Award nominations.  James McAvoy as Xavier, Sophie Turner as Jean Grey, and Michael Fassbender as Erik are overwrought, and when they are trying to have serious conversations, they deliver hackneyed and derivative dialogue and unoriginal speeches.  Maybe their bad acting is a result of uninspired script writing.  However, I did find that Tye Sheridan as Scott, Kodi Smit-McPhee as Kurt, and Alexandra Shipp as Ororo made the most of their scenes, especially Sheridan.  If his Scott Summers/Cyclops were the center of Dark Phoenix, the film would be much better.  Because of him, I am giving this film a higher grade than I planned to do.

Dark Phoenix just doesn't work, and it rarely connected with me.  I don't think that it will connect with audiences the way some of the best and most popular X-Men films did.  Oh, well – let's hope that Marvel Studios does better with its planned X-Men films...