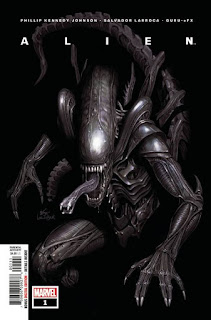 Alien is a 1979 science fiction horror film directed by Ridley Scott and written by Dan O'Bannon, based on a story that O'Bannon wrote with Ronald Shusett.  The film depicts a battle for survival between the crew of the commercial towing vehicle,  the space ship named “the Nostromo” and an aggressive deadline extraterrestrial creature, the “Alien” of the title, that is now known as a “Xenomorph.”

Alien, which went on to win an Academy Award, spawned a film franchise, beginning with writer-director James Cameron's 1986 science fiction action film, Aliens.  Alien also begat a media franchise, which included a comic book adaptation and also a novelization of the original film.  In 1988, Dark Horse Comics launched its first Alien comic book series, a 1988-89, six-issue comic book miniseries, entitled Aliens.  Dark Horse had the license to produce comic books based on the Alien franchise from 1988 to 1999 and again from 2009 to 2020.

Marvel Comics announced in 2020 that it had obtained the license to produce comic books based on the Alien film franchise.  Marvel Comics recently launched the first comic book series, Alien.  It is written by Phillip Kennedy Johnson; drawn by Salvador Larroca; colored by Guru-eFX, and lettered by Clayton Cowles.  This new Alien comic book focuses on a recently retired security agent who once faced the Xenomorphs and may have to again.

Alien #1 opens in January of the year 2200 on the Epsilon Orbital Research and Development Station.  It introduces Gabriel Cruz, a man who has given his life to Weyland-Yutani as a defense agent.  He is retiring as the security agent for Weyland-Yutani's Epsilon Station.  With the help of his friend, a Bishop-model android, Cruz hopes to reconnect and patch things up with Danny, his estranged son.  However, Danny has dangerous and ulterior motives for reuniting with his father.

Once upon a time, Gabriel barely survived an alien attack.  And now, it seems that his encounters are far from over.

THE LOWDOWN:  I am a big fan of the Alien film franchise, and I have lost count of how many times I have watched James Cameron's Aliens, including a few times just recently.  I have seen both Alien vs. Predator films numerous times and will watch them many times more.

Early in Dark Horse Comics' run of Alien comic books, I was devoted to the company's output, but lost interest after several years.  I thought the new Marvel Comics' title would be a good time to start reading Alien comic book again, and I was right.

Writer Phillip Kennedy Johnson whets the appetite with the promise of thrills to come while offering tasty teases of back story involving Gabriel Cruz.  Books about writing will always say that the writer should create strong characters and that the plot will develop from the characters.  Basically, the characters should act as the spine of the story.  I find the spine of this story, Gabriel and Danny, to be dull, and I have no interest in their crappy relationship.  On the other hand, the plot is quite strong.  Johnson makes Alien #1 a fun read when he focuses on the threat of the “Aliens” and on the looming disaster that will fully bring them into the story.

I would not call the art and graphical storytelling in Alien #1 peak Salvador Larroca.  For one thing, all the characters have faces that look like they underwent bad plastic surgery.  The compositions have a generic, Larroca clip art quality, but Guru-eFX's power-coloring and super-hues cover up the blemishes as well as any coloring can.

Still, Marvel's Alien #1 intrigues, especially if you, dear readers, are fans of the Xenomorphs.  I think I should keep reading … at least for the first story arc.

I READS YOU RECOMMENDS:  Fans of the Alien/Aliens film and comic book franchises will certainly want to try Marvel's Alien.