Review: "THE NEW MUTANTS" is the Final Stinker ... Finally 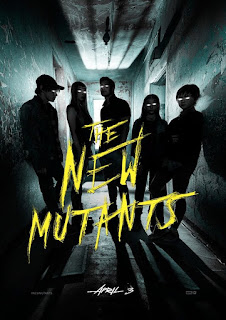 The New Mutants is a 2020 superhero movie from director Josh Boone.  It was 20th Century Fox’s thirteenth and final film film based on Marvel Comics’ X-Men comic book franchise.  The film uses comic book characters and stories created by writer Chris Claremont and artist Bob McLeod and Bill Sienkiewicz.  The New Mutants movie focuses on five young mutants held in a secret facility where they try to deal with their powers, pasts, and sins.

The New Mutants opens with Danielle “Dani” Moonstar (Blu Hunt), a young Cheyenne Native American, experiencing the devastation of her entire reservation by what seems to be an “F5” tornado.  After falling unconscious during the tornado, Dani awakens in an empty hospital room to find herself secured to a bed by restraining straps.

Dani soon meets Dr. Cecilia Reyes (Alice Braga), who comforts Dani.  Dr. Reyes explains that Dani is not an ordinary human being, but is rather a “new mutant,” a mutant who is just awakening to her mutant abilities and powers.  Dr. Reyes also explains that Dani will be confined to this mysterious and unnamed medical facility until they discover what exactly Dani's mutant power is and also until Dani learns to control that power.

Dani is introduced to four other new mutants:  Sam (Charlie Heaton), Illyana (Anya Taylor-Joy), Roberto or “Bobby” (Henry Zaga), and Rahne Sinclair (Maisie Williams).  Rahne befriends Dani and the two set out to discover the secrets of both the facility and the identity of the mysterious entity (Essex Corporation) that controls it.  Dani discovers that she isn't the only one trying to escape the traumas of her past.  Will her mysterious power and her past, personified by a mythical creature called the “Demon Bear,” destroy not only Dani, but also the other new mutants.

Apparently, Josh Boone, the co-writer and director of The New Mutants,” described the film's same-sex love story and subplot between Dani and Rahne as “character-driven stuff.”  That pretty much describes the character drama and development in The New Mutants; it's all just stuff.  Dani and Rahne's gay-teen-puppy-love is actually sweet, and when The New Mutants focuses on that, the film is actually enjoyable.  All the other character-driven … stuff is the usual young adult tropes:  (lame) bullying; (lame) guilt, (lame) grief, and (lame) teen squabbling and conflict.  And the rotten cherry on top is Anya Taylor-Joy's awful, lazy, and deplorable Russian accent as Illyana.

The New Mutants is an explosive concept, especially considering that it follows kids with traumatic pasts who have largely unknown and untested, dangerous extraordinary powers.  The New Mutants film is a misfire instead of an explosion.  It is not that this film's story is incoherent; it is simply an easy-to-follow, but boring story.  I wanted the characters to save themselves and to have a happy ending because I simply wanted this tiresome and uninspiring movie to end.

When I first heard that 20th Century Fox was making a horror movie set in the X-Men franchise, I thought that this film could be a disaster, but I secretly hoped that they could pull it off.  But my first instincts were right, and luckily Disney absorbed Fox and put an end to Fox's parade of trashy X-Men movies.  As bad as The New Mutants is (and it is awful), its ending also signals the end of a nightmare series of movies in a franchise that had a very promising start back in 2000 with the film simply entitled, X-Men.  I won't recommend The New Mutants to anyone, even to the fans that feel they have to watch every X-Men movie.