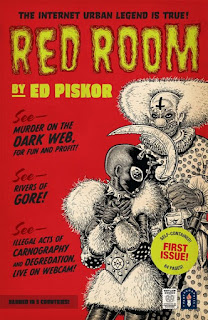 Published by Fantagraphics Books, Red Room is a 12-issue series.  Described by the publisher as “a cyberpunk, outlaw, splatterpunk masterpiece,” Red Room focuses on a murderous, dark web subculture in which a secretive audience pays to view webcam murders with crypto-currency.

Red Room #1 opens in Steel Valley, specifically at the Steel Valley Municipal Courthouse.  There, we meet longtime courthouse clerk, Davis Fairfield, who is about to get some terrible news.  His wife, Delores, and one of his two daughters, Hayley, have been killed by a drunk driver.  Now, Davis and his daughter, Brianna, a high school senior on the verge of graduating, must soldier on.  Luckily, Brianna has her friend, Taylor (“Tay-Tay”), but what does dear old dad have?  Where does he go for fun?

Davis Fairfield goes to a “Red Room.”  Red Rooms are places on the Internet with encrypted I.P. addresses.  Each Red Room is a webcam stream where viewers can watch a “torture star” murder another human being in the most brutal, savage, vile, and stomach-turning ways.  With the help of untraceable crypto-currency, a subculture of criminals has emerged in which one side patronizes the webcam murders for entertainment and in which the other side gleefully kills to entertain in what seems like the evolution of the snuff films of folklore.

Soon, Davis will find himself caught up in the machinations of murder-torture-porn entrepreneur, Mistress Pentagram, who has bloody ambitions for her “Pentagram Pictures.”  Who are these murderers, with names like “Poker Face” and “Sarah Jane Payne?”  Who are these victims, who could be you?  Who can stop this?!

THE LOWDOWN:  Red Room #1 is a science fiction comic book, albeit a dark one.  It has elements of dystopian sci-fi, speculative fiction, and contemporary drama.  It would be easy to call this new series depraved, which it is not.

Red Room trades in the depravity of humanity.  For all that it may be science fiction, Red Room, even with its exaggeration and inventiveness, is quite plausible, for the most part.  Let's not kid ourselves.  We don't have to go too far into cable and satellite television or online to find people during horrible things to their spouses, children, family, friends, co-workers, and strangers.  Mass shootings have become so frequent in the United States that they hardly register anymore with some people.

Ed Piskor's inventive depictions of torture and murder almost have a Tex Avery or Looney Tunes-inspired madness to them.  I find that this keeps me from loosing myself in the murders and then, forgetting the narrative.  It would be a shame to forget the story, but I understand why the cartoonist would depict the violence the way he does.  Piskor's Red Room has more in common with classic Underground Comics than the fantasy and horror comic books published by the defunct DC Comics label, Vertigo, or even Image Comics and BOOM! Studios.  Some of those comic books are satirical, but they are meant for the “straights.”

Red Room is a rebel vision, and Piskor's satire is closer to R. Crumb's than to Kurt Vonnegut's.  Like Gilbert Hernandez, Piskor is liberated in the way he can be scatological.  Red Room trades in trash culture in the creation of a work that speculates on a possible future for and direction of a segment of mass culture and entertainment.

Actually, the best thing that I can say about Red Room #1 is that I find it so intriguing.  From the first page on, I found myself drawn into its world.  Every page made me want more, and I really wanted more by the time I reached the last page.  And, dear readers, I have to recommend any comic book that gives its readers a first issue of 64 pages, especially when those 64 pages are all-new, all-different, all-good, and all-unapologetic.

I READS YOU RECOMMENDS:  Fans of Ed Piskor's work and of alternative comics as science fiction will want to read Red Room.