Review: Takes a Bit, But Pixar's "Soul" Finds its Soul 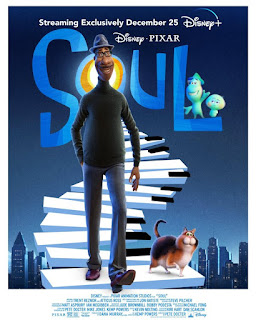 Soul is a 2020 American computer-animated, comedy-drama, and fantasy film from director Pete Docter and co-director Kemp Powers and is produced by Pixar Animation Studios.  Soul is also the first Pixar film to feature an African-American protagonist.  Soul focuses on a jazz pianist who finds himself trapped in a strange place that exists between Earth and the afterlife.

Soul introduces Joe Gardner (Jamie Foxx), a pianist living in New York City and who dreams of playing jazz professionally.  He is also a middle school music teacher at M.S. 70, and the school's Principal Arroyo (Jeannie Tirado) has just offered to make him a full-time teacher.  Joe's mother, Libba, (Phylicia Rashad) insists that he make teaching a full time job, fearing for his financial security as a jazz musician chasing gigs and sessions.

One day, a former student, Lamont “Curley” Baker (Ahmir-Khalib Thompson a.k.a. Questlove), who is now a jazz drummer, tells Joe that there is an opening in the jazz group, “the Dorothea Williams Quartet,” and that auditions are being held at “The Half Note” jazz club.  Dorothea Williams is a legend, and playing in a jazz outfit like hers has been Joe's dream for years.

But an accident causes Joe's soul to be separated from his body, and Joe ends up trapped between “the Great Beyond” and “the Great Before.”  And perhaps the only thing that can save Joe is helping a wayward soul known as “22” (Tina Fey).

Soul may feature Pixar Animation Studios' first African-American lead, Jamie Foxx's Joe Gardner,, but it is not really a “black film.”  The film is not a celebration of ordinary black people, but it dares to imagine black people as ordinary folks who have the same ups and downs, successes and failures, and hopes and dreams as everyone else.  Also, Soul is the most adult film that Pixar has produced to date.  I think children could enjoy it, but Soul deals with the kind of existential questions that adults face.  In fact, I found that the film's story seemed to confront me about my life on more than a few occasions.  I also like that the film asks a lot of questions, but bluntly and stubbornly refuses to answer all of them.

I did find the first 50 minutes of Soul to be muddled in terms of the narrative.  Everything about it is technically proficient, but the story lacks … soul.  It is not until Joe and 22 reach Earth that Soul really begins to grapple with the struggle between living a life with a purpose as in goals and living a life in which once enjoys living.

Whenever I review a Pixar film, I really don't get into the quality of the animation.  From the standpoint of technology and art, Pixar has practically always been astounding and awesome.  For a long time now, Pixar's computer-animation (or 3D animation) has been so good and so beautifully rendered and colored that it makes me forget that I am watching an animated film.  Soul, in its dazzling colors, inventive characters, and imaginative settings (“the Great Beyond” and how it welcomes a soul), is about as strong as its predecessors

Soul's film score recently won an Oscar.  Jon Batiste's jazz compositions and arrangements are captivating, and made me feel like I was right there in the performance.  Trent Reznor and Atticus Ross' score, especially when the story moves into the realms of the soul, is ethereal, magically, and futuristic, and sounds like music from another world.

I like the voice performances.  Jamie Foxx does not fully sound like Jamie Foxx, and, in that, he makes Joe Gardner feel like a genuine character.  What more can I say about Tina Fey?  As “22,” she shows, once again, that she has talent to burn.  Also, I think Phylicia Rashad makes the most of every line she has in the film; she makes Libba Gardner seem like a real mother.

Ultimately, Soul reminds me that I really need Pixar Animation Studios in my life.  Pixar's feature films find the best of humanity and emphasize the beauty in us all.  This time, Pixar gives us Soul to remind us to look up and notice the beauty in us and in the world around us.

Posted by Leroy Douresseaux at 6:07 PM