Review: "JUDAS AND THE BLACK MESSIAH" is Divine * 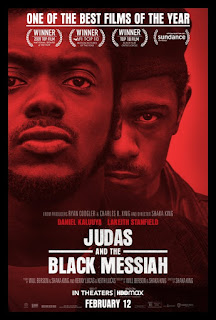 Judas and the Black Messiah is a 2021 drama, historical, and biopic from director Shaka King.  The film is a dramatization of the betrayal of Chicago Black Panther Party leader, Fred Hampton, by FBI informant, William O'Neal.  Judas and the Black Messiah was eligible for the 2020 / 93rd Academy Awards due to an eligibility window extension granted by the Academy of Motion Picture Arts and Sciences because of the COVID-19 pandemic.

Judas and the Black Messiah opens in 1968.  Nineteen-year-old petty criminal William “Bill” O'Neal (LaKeith Stanfield) is arrested in Chicago after attempting to steal a car while posing as a federal officer.  Bill is looking at hard time in prison, over six years, but he is approached by FBI Special Agent Roy Mitchell (Jesse Plemons) with a special offer.  Agent Mitchell can have O'Neal's charges dropped if he works undercover for the bureau.  Bill is assigned to infiltrate the Illinois chapter of the Black Panther Party (BPP) and to spy on its leader, Chairman Fred Hampton (Daniel Kaluuya).

Bill begins to grow close to Hampton, as the Chairman works to form alliances with rival street gangs, such as “The Crowns.”  Hampton extends the BPP's community outreach through the Panthers' “Free Breakfast for Children Program.”  By 1969, Hampton's persuasive oratory skills eventually help to form the multiracial “Rainbow Coalition,” which unites the Panthers with the “Young Lords,” a Puerto Rican militant group, and “The Young Patriots,” a militant group comprised of poor and displaced white people.  Still, Hampton even finds time to fall in love with party member, Deborah Johnson (Dominique Fishback).

Hampton's rise and success makes the FBI determined to stop him before he becomes what J. Edgar Hoover (Martin Sheen), Director of the FBI, calls a “Black Messiah.”  Meanwhile, a battle wages in Bill O'Neal's soul.  Will he help the FBI destroy Fred Hampton?

Judas and the Black Messiah may have received all its awards for the year 2020, but this powerful dramatization of a pivotal moment in the history of the Civil Rights movement is already one of 2021's best films.  What the writers of this film have created is a condemnation of racial injustice, mostly in the form of the local (Chicago Police Department), state, and federal law enforcement (FBI) and also in the form of the courts and prisons (especially Menard Correction Center, the prison where Hampton was incarcerated).

However, the writers also present, both in subtle ways and in obvious strokes, the racial injustice that comes from the economic deprivation and social inequality that ordinary black people suffer.  Director Shaka King shows it in the two worlds in which the traitorous Bill O'Neal travels.  The first is Agent Roy Mitchell's comfy home and the fancy restaurants where Mitchell meets Bill, and the second is the world of rundown buildings and impoverished neighborhoods where Bill is a thief, a Panther, and a two-faced, self-serving coon who has a prison sentence over his head, which leads him to be a traitor.

Bill O'Neal really isn't a “Judas” anymore than Fred Hampton is really a “messiah,” black or otherwise.  Yes, Shaka King does play some of this film, especially its last act like a mystery play or Biblical allegory, retelling and reshaping the story of the betrayal of Jesus Christ at the hands of Judas Iscariot.  O'Neal and Hampton seems like people swept up by the tide of events that was the postwar Civil Rights movement.  Their story is tragic, but Judas and the Black Messiah seems to ask us two questions:  What now? And where do we go from here?  The questions are not related to the late 1960s so much as they are being asked of us at the dawn of the third decade of the twenty-first century.

As Bill O'Neal, LaKeith Stanfield gives a layered and multifaceted performance.  Even when Stanfield plays Bill as angry or desperate, he creates multiple layers to that anger and desperation in each scene.  Before the credits, Judas and the Black Messiah presents some archival footage of the real William O'Neal, and seeing that made me believe that Stanfield made a Meryl Streep-like transformation in creating a fictional O'Neal that was, in some ways, very much like the real person.

I can see why Daniel Kaluuya won the “Best Supporting Actor” Oscar for his performance as Fred Hampton.  Kaluuya embodies the hope and the lost potential that people now look back and see in Fred Hampton.  In the last act, Kaluuya truly makes Hampton seem messianic.  And that is worth an entire shelf full of awards.  I would be remiss if I did not mention how deliciously and wickedly great Martin Sheen is as J. Edgar Hoover, Director of the FBI, thirsting for Hampton's blood.

Judas and the Black Messiah continues the run of important African-American films confronting the legacy of racism in the United States, films like If Beale Street Could Talk and BlacKkKlansman, both from 2018.  It goes without saying that this is an important film for those interested in the history of the Civil Rights Movement.  Judas and the Black Messiah is for you, dear readers, if you want  to see American films that electrify the important chapters in the American story.

2021 Golden Globes, USA:  1 win: “Best Performance by an Actor in a Supporting Role in a Motion Picture” (Daniel Kaluuya) and 1 nomination: “Best Original Song - Motion Picture” (Tiara Thomas-lyrics, H.E.R.-music/lyrics, and D'Mile-music for the song “Fight for You”)

Posted by Leroy Douresseaux at 6:13 PM