Review: "Batman and Harley Quinn" is an Ode to Bruce Timm-Era Batman TV 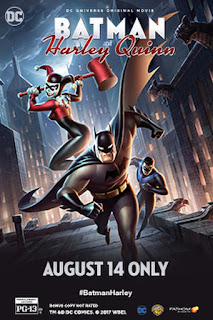 Batman and Harley Quinn is a 2017 straight-to-video animated superhero film from Warner Bros. Animation and director Sam Lui.  The film shares a connection and design style with the animated television series, “The New Batman Adventures” (1997-99), and is spiritually related to that series' predecessor, “Batman: The Animated Series” (1992-95), which is the series in which Harley Quinn made her first appearance.  In Batman and Harley Quinn, Batman and Nightwing are forced to team with Harley Quinn in order to stop a global threat.

Batman and Harley Quinn opens with Batman (Kevin Conroy) and his partner, Nightwing (Loren Lester), who was once known as Robin, the Boy Wonder.  The duo has discovered that the villainess, Poison Ivy / Pamela Isley (Paget Brewster) has teamed up with Jason Woodrue, the Floronic Man (Kevin Michael Richardson), an alien plant creature that shares Poison Ivy's desire to give plants supremacy of Earth over humanity.  Poison Ivy and Floronic Man plan to create their own viral version of the “bio-restorative formula” that transformed Dr. Alec Holland into the Swamp Thing (John DiMaggio).  To that end, they have kidnapped a scientist, Dr. Harold Goldblum (Rob Paulsen), and forced him to help them replicate the formula.

Ivy and Woodrue are unaware that their altered formula could destroy all life (human, animal, and plant), so Batman and Nightwing must stop them before they finish their formula.  However, “the Dynamic Duo” are struggling in their mission to find the villains and reluctantly turn to Ivy's best friend, Harley Quinn (Melissa Rauch), in the hopes that she will have an idea or two on where to find Ivy.  But Harley has gone into hiding after her most recent recent parole from imprisonment.  Finding Harley won't be easy, and who says she wants to help Batman and Nightwing find her BFF – best friend forever!  And if she does cooperate, can Batman and Nightwing trust Harley?

Bruce Timm was one of the main creative forces behind “Batman: The Animated Series” and “The New Batman Adventures,” as well as other wonderful animated television series that featured DC Comics superheroes.  So I am always happy when he returns to his corner of the animated DC Universe, this time as a writer and executive producer.  One of my favorite animation writers, Jim Krieg, co-wrote Batman and Harley Quinn with Timm.  Voice actor Kevin Conroy, who is beloved for his work playing the voice of Batman / Bruce Wayne on several animated TV series and films, also returns as the voice of Batman for this film.

So I have a few reasons to love Batman and Harley Quinn, and I did indeed enjoy it, but it isn't one of the better direct-to-DVD animated DC Universe films.  The Floronic Man is an uninteresting bag of wind as a villain despite the best efforts of talented voice actor, Kevin Michael Richardson.  Also the Poison Ivy of this film is shallow, and looks weird.

The plot is lame, but their a few things that make me like Batman and Harley Quinn.  First, Timm and Krieg offer strong takes on the characters of Batman, Nightwing, and Harley, and the relationship dynamic between them as a trio or as a trio of duos sparkles with wit and genuine feeling.  Secondly, there are some surprisingly magical moments in this film, such as the karaoke medley in the middle of the film.  The Sarge Steel (John DiMaggio) and A.R.G.U.S. subplot is nice.  Finally, I love the design of the animation and the animation in general in this film.  It is as if “The New Batman Adventures” returned from the old cartoons graveyard for an hour or so.

Despite my reservations concerning its weak plot and villains, I highly recommend Batman and Harley Quinn to fans of Bruce Timm's 1990s Batman TV shows.  When it comes to animation overseen by Timm, I'll take anything and everything I can get.