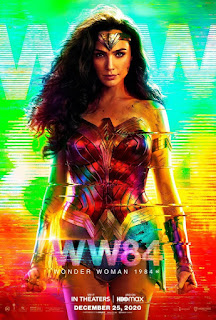 Wonder Woman 1984 is a 2020 superhero fantasy film from director Patty Jenkins.  The film stars the DC Comics superhero, Wonder Woman, who first appeared in All Star Comics #8 (1941) and was created by writer William Moulton Marston (with artist Harry George Peter).  It is a direct sequel to 2017's Wonder Woman and is also the ninth film in the DC Extended Universe (DCEU) film series.  In Wonder Woman 1984, our titular hero must battle a colleague and a businessman whose desire to have everything they ever wanted and much more could destroy the world.

Wonder Woman 1984 opens on the island of Themyscira, the home of the Amazons.  There, young Diana (Lilly Aspell) is trying to be the most accomplished Amazon.  In an athletic event against older Amazons, young Diana must also learn an important lesson about getting what she wants.

The story moves to 1984.  Diana Prince (Gal Gadot) works cultural anthropology and archaeology at the Smithsonian Institution in Washington, D.C.  Secretly, Diana is also the superhero known as “Wonder Woman.”  At work, Diana meets and eventually befriends a new museum employee, Barbara Minerva (Kristen Wiig), a shy woman whose professions are geology, gemology, and lithology, in addition to being a cryptozoologist.  Barbara is barely seen by her co-workers, and she comes to envy Diana, whose radiance draws people to her.

One day, the FBI asks the museum to identify some stolen antiquities, and among them is a mysterious item, a “citrine” that turns out to be called the “Dreamstone.”  Also interested in this item is a failing businessman, Maxwell “Max” Lord (Pedro Pascal), who believes that the stone has “wish-granting” powers that can both save his failing oil company, “the Black Gold Cooperative,” and make him the powerful man he has always wanted to be.  No one really understands how dangerous the Dreamstone can be, even Diana, who gets her deceased lover, Steve Trevor (Chris Pine), back into her life.

I like that Wonder Woman 1984 deals with such themes as immediate gratification, getting things the easy way without working for it, cheating to get what you want, and the desire to have something before you are ready to have it.  However, it is the execution of these themes that is problematic.  For a film that beats viewers over the head with the idea that it is bad to get whatever you wish for, Wonder Woman 1984 is filled with magical thinking.  This film's story is illogical, nonsensical, silly, and full of pretty pictures while being largely empty and devoid of substance.

Having Steve Trevor's spirit possess the body of an actual living man and control it is a horrible idea.  Supposedly, co-writer/director Patty Jenkins says that the Trevor subplot is a reference to the body-switching trope found in films like Freaky Friday: The Movie (1976) and Big (1988).  If true, this explanation is lame.  Having Wonder Woman basically hold a man hostage so that she can use his body to play kissy-face with her dead lover's spirit does not seem like something Wonder Woman would actually do.  I won't go into the non-consensual element of this relationship...

However, that is just one element of the entire nonsense that is having Steve Trevor in this film.  In one sequence, it just happens to be the Fourth of July, which leads to Wonder Woman and Trevor stealing a conveniently located jet and flying through the clouds that are lit up by the holiday fireworks below.  Wonder Woman asks Trevor what makes flying as a pilot so special to him, and the dude says that it is because of the wind and the air...

I'm not even sure why this movie is called Wonder Woman 1984, as very little about that year really permeates this film.  1984 seems like nothing more than an arbitrary date, while calling this film “Wonder Woman: The Year of Schmaltz and Syrupy Sentiment” would seem more accurate.

Nothing epitomizes Wonder Woman 1984's nonsensical, trite, contrived nature than the “lead” villain, Max Lord.  Heaven knows that Pedro Pascal gives it his all in order to fill the vast emptiness that is Max, but even his acting skills can't save this bomb of a character.  Patty Jenkins and Geoff Johns' hackneyed script gives Max a child, Alistair (Lucian Perez), a pensive-faced waif who just loves his daddy no matter how much daddy ignores and minimizes him.  The presence of the child only emphasizes how lame Max Lord is.

The better villain is Kristen Wiig's Cheetah (who is not called that in the film), but the script relegates Barbara Minerva/Cheetah to side-piece status.  Minerva and Cheetah had the potential to be an excellent counter to Diana Prince/Wonder Woman, but no, the man-villain must be the center of attention.  Also, I'm pretty sure that Cheetah appears merely for licensing purposes – perhaps, as a hard-to-find, low-run, female action figure.

Just as she was the last time, Gal Gadot is gorgeous in this film, but whereas the Wonder Woman she played in the original film was so strong, independent, and fierce, the Wonder Woman of the sequel is a clueless broad who pines after the ghost of a long dead man.  Everything the heroine of this sequel does is either strange or thoughtless, and she puts herself and others in danger cause she's just gotta have her (dead) man!  Wonder Woman 1984 turns Gadot's Wonder Woman from historical in the first film to hysterical in the sequel.

The only reason that I am not giving Wonder Woman 1984 a grade of “D” or even of “F” is because I was so happy to see Lynda Carter, TV's Wonder Woman of the 1970s, in a mid end credits scene.  Yeah, that's a spoiler that I didn't warn you about, but hey, I am warning you about the rest of Wonder Woman 1984.  Now, dear readers, you can watch it while expecting much less of it than I did.


The text is copyright © 2021 Leroy Douresseaux. All Rights Reserved. Contact this site for reprint and syndication rights and fees.