Review: Mads Mikkelsen is the Best Reason for "ANOTHER ROUND" 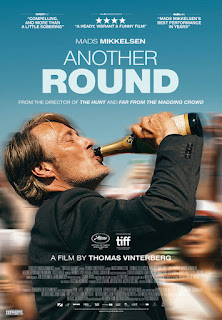 Druk is a 2020 Danish drama film from director Thomas Vinterberg.  Druk is also known by its English title, Another Round, the title to which it will be referred in this review.  Although the film is an international co-production between Denmark, the Netherlands, and Sweden, Another Round won the “Best International Feature Film” Oscar at the recent 2021 / 93rd Academy Awards as a representative of Denmark.  Another Round focuses on four high school teachers who binge drink alcoholic beverages to see how it affects their lives and work.

Another Round opens in Denmark and introduces Martin (Mads Mikkelson), a middle-age high school teacher.  He is married to Anika (Maria Bonnevie), and they have two teenage sons, Jonas (Magnus Sjørup) and Kasper (Silas Cornelius Van).  Martin is a close friend of three of his colleagues:  Nikolaj (Magnus Millang), Peter (Lars Ranthe), and Tommy (Thomas Bo Larsen) at a gymnasium school in Copenhagen.  All four men struggle with unmotivated students, and each feels that his life has become boring and stale, especially Martin, who is the instructor for senior history.  In fact, his students and their parents are so concerned that he is not preparing them for their graduation exams that they meet with him.  Martin is also depressed because of troubles to his marriage to Anika.

At a dinner celebrating Nikolaj's 40th birthday, the four men begin to discuss Norwegian psychiatrist Finn Skårderud (a real-life person).  The “Skårderud hypothesis” says that man is born with a deficit of 0.05% blood alcohol content (BAC).  A 0.05 BAC makes a person more creative and relaxed.  Thus, Nikolaj suggests that the four of them engage in an experiment to test the Skårderud hypothesis.  The experiment will involve the four of them consuming alcohol on a daily basis in order to make sure that their BAC should never be below 0.05.  The initial results are good, especially for Martin, but will flirting with alcoholism always yield good results?

If Danish actor Mads Mikkelson is not an international movie star, he should be.  He career includes appearances in several Danish Oscar-nominated foreign language films, besides Another Round, and those are After the Wedding (2006), A Royal Affair (2012), and The Hunt (2013).  He has also made appearances in some Hollywood big-budget event movies, including the James Bond movie, Casino Royale (2006); the remake, Clash of the Titans (2010); and Marvel Studios' Doctor Strange (2016), to name a few.

Mikkelson's Martin defines the themes of Another Round that deal with the midlife crisis, marital strife, family discord, and professional dissatisfaction.  His costars give good performances, but Mikkelson is the star here.  His nuanced and layered performance as a man in full midlife depression is radiant, and the story seems to lack quite a bit of energy whenever he is not on screen.

As films about midlife crises go, Another Round is enjoyable, and it is quaint compared to the lurid American Beauty (1999), a “Best Picture” Oscar winner that is as pretentious as it is salacious.  Truthfully, neither film really excites me, as I could give a crap about middle crises.  I can't see myself recommending Another Round except to Americans who enjoy “international films.”  Still, Another Round has Mikkelsen, and if it must be remembered, it should be remembered as an entry in his exceptional filmography.

The text is copyright © 2021 Leroy Douresseaux. All Rights Reserved. Contact this blog or site for reprint and syndication rights and fees.

Posted by Leroy Douresseaux at 1:12 PM