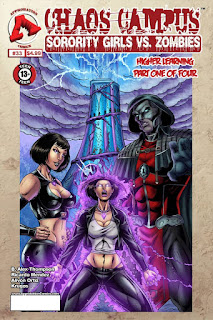 Chaos Campus: Sorority Girls vs. Zombies is the long-running zombie apocalypse comic book series from Approbation Comics.  Mixing in elements of comedy, horror, adventure, and magic, it is the creation of B. Alex Thompson.  The series is set during a zombie invasion and follows the adventures of three members of the sorority, Epsilon Alpha Zeta Upsilon (EAZY):  ass-kickin’ Jamie Lynn Schaeffer, brainy and magic-wielding Paige Helena Patton, and sexy goddess-type Brittany Ann Miller.

Chaos Campus: Sorority Girls vs. Zombies #33 opens in the aftermath of “Lineage” (from issue #32).  Paige is having bad dreams, and the uncertainty and the frustrations with the responsibilities and hopes placed on her begin to push her to a breaking point.  Her friends and her mother, Morgan, and brother, Tyler, try to comfort Paige.  Even Oliver offers help, but Paige is not sure about his motives.

However, the fam and the friends are not the only ones who have been noticing Paige's emotional and mentally vulnerable state.  Tech Locke, always one dream or portal away, makes his move in trying to recruit Paige to his side.   What could Tech possibly have that would make Paige turn her back on her family, friends, and mission?  It's a secret.

THE LOWDOWN:  After bringing “The Road to Salvation” story line to an end, writer B. Alex Thompson continued to bring levity to Chaos Campus via a series of standalone stories.  However, in the most recent standalone story, “Lineage,” writer B. Alex Thompson revealed that Brittany shares her body with an ancient Greek goddess known as “the Twelfth.”

Now, Thompson turns Chaos Campus' narrative eye to Paige Helena Patton with the beginning of a new story arc, “Higher Learning.”  At first Tech Locke, the mystery man who is obsessed with Paige, seems like nothing more than a pest.  Thompson throws in a twist when he uses not Locke's own secrets, but the secrets others keep as the hook to pull readers into this new arc.

As usual, Ricardo Mendez's art and graphical storytelling are strong, and in many ways, he has become the second signature “voice” of Chaos Campus.  This series' narrative engine runs smoothly under the guiding hands of Mendez's compositions.  It seems that, at least for now, no one can transform Thompson's Chaos Campus scripts into comic book art and storytelling better than Mendez.

Good coloring has blessed Chaos Campus, and the colors and dazzling color effects by Alivon Ortiz make even the quite pages in issue #33 pop. Letterer Krugos continues the steady beat of this series, and that beat may very well carry more of you, dear readers, to Chaos Campus #33.

POSSIBLE AUDIENCE:  Fans of zombies and of horror-comedies will want to try Chaos Campus: Sorority Girls vs. Zombies.