"The Sorcerer's Apprentice" a Miscast Spell 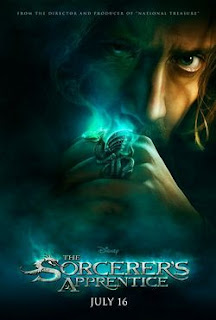 Released this past summer, The Sorcerer’s Apprentice is a fantasy/adventure film based, in part, on The Sorcerer’s Apprentice segment of Walt Disney’s 1940 animated film, Fantasia (which itself is based on earlier source material). In this new film, a centuries-old, former apprentice of Merlin must take an apprentice of his own – a young man barely out of boyhood who must save the world.

The film opens in 740 A.D., as the sorcerer Merlin (James A. Stephens) battles the evil sorceress, Morgana le Fay (Alice Krige). One of Merlin’s three apprentices, Maxim Horvath (Alfred Molina), sides with Morgana. Merlin’s other two apprentices, Balthazar Blake (Nicolas Cage) and Veronica Gorloisen (Monica Bellucci), are forced to stop Morgana and Maxim, but not before Morgana mortally wounds Merlin. Merlin charges Balthazar with finding his successor, known as the Prime Merlinian, the only one who can put an end to Morgana.

In present day Manhattan, Balthazar is a master sorcerer and shop owner when he encounters New York University student, David “Dave” Stutler (Jay Baruchel), a seemingly average guy who demonstrates hidden potential. Dave becomes Balthazar’s reluctant protégé and begins a crash course in the art and science of magic. However, Dave has more than magic on his mind; he’s in love with a former school chum and fellow NYU student, Rebecca “Becky” Barnes (Teresa Palmer). Even the return of Balthazar’s mortal enemy, Horvath, cannot get Dave to focus on magic. Can the sorcerer’s apprentice survive his training, help his master save New York City from Horvath, and finally get the girl?

As a film narrative, The Sorcerer’s Apprentice is a good idea. Actually, it is a movie with a lot of good ideas, but much of it is badly done. The movie is also largely miscast. Nicolas Cage feels wrong as a sorcerer and Jay Baruchel is just plain wrong as a sorcerer’s apprentice. It is almost pointless to get into the acting because it is bad. What the hell is Nicolas Cage doing in this film, because it can barely past as pretending, let alone performing?

The script is filled with substandard dialogue, or does it just seem that way because of Cage and Baruchel’s bad acting? Or maybe bad dialogue isn’t the culprit because the wonderful-as-usual Alfred Molina does well with it, making the most of everything this story and script offers him. His Horvath is genuinely a menacing guy, and he will make you dread his appearances on screen – in a good way.

Poor Teresa Palmer: I don’t even know what Becky Barnes is doing in this movie. The character defines extraneous.

As a Nicolas Cage fan, I was determined to find good in The Sorcerer’s Apprentice. Most of the first 40 minutes of the movie is dynamite entertainment, but the final act is a welcomed sign that this movie is coming to a conclusion. What more can I say? The Sorcerer’s Apprentice has such potential, and those few times it meets that promise, the movie offers light-hearted fun – just not enough to save the rest of the movie.