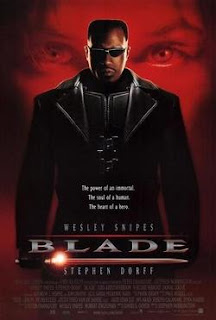 Blade (Wesley Snipes) is a vampire hunter. Born Eric Brooks, his mother died from a vampire attack, and Eric, still in the womb, underwent a change in his DNA, which made him part human and part vampire. He has all the vampires' strengths but none of their weakness. As a adult, Blade seeks revenge on all vampires.

Blade’s war on the vampire nation focuses on Deacon Frost (Stephen Dorff), an ambitious bloodsucker who plans to resurrect the vampire god, La Magra. Blade rescues Dr. Karen Jenson (N’Bushe Wright), a doctor attacked by one of Frost’s henchmen, and she joins Blade and his fellow soldier/father figure Abraham Whistler (Kris Kristofferson) in the battle to stop Frost and his world ending plans.

Directed by Stephen Norrington, Blade is an exhilarating, action thriller/horror. Before The Matrix, Blade featured sped up motion and high tech chop socky. With a pumped up electronica soundtrack and the visual panache of a music video, Blade didn’t have to lean on its skimpy story. It is amazing eye candy: cool, fast paced, violent, gory; it is a part arcade game, part music video, horror movie, action movie, and all around good time.

The performances are decent. Snipes is dead on monotone as the super vampire killer, and Dorff is the delightful, eternally young and sexy bad boy. Kristofferson is cardboard gruff and Ms. Wright is earnest, if not a bit over reaching, in her determination to act like the serious doctor/scientist.

A review can’t really do this very fun film the justice it deserves. Blade is not smart. It’s perfect action movie entertainment that delivers much more than it initially seems to offer. Reading this won’t do it. Blade and Deacon Frost are all bad boy cool with a very good movie as the backdrop. Just see the damn thing for yourself.