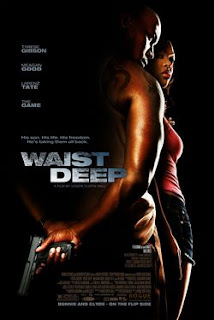 When he got out of prison, recently paroled ex-con O2 (Tyrese Gibson) told his son, Junior (Henry Hunter Hall) that he’d never leave him again. When Junior is kidnapped during a carjacking, the desperate single father is determined to keep his word, but retrieving his son involves guns, a violation of his parole. When his cousin, Lucky (Larenz Tate), informs him that local gang kingpin, Meat (The Game), has Junior and wants $100,000 in payment for Junior’s return, O2 is ready to get the money anyway he can. Joined by Coco (Meagan Good) a down-on-her-luck, street hustler, O2 embarks on a string of bank holdups and safe-house stickups to get the money, but taking on the vicious Big Meat might be too much for the new Bonnie and Clyde.

In Vondie Curtis-Hall’s urban thriller, Waist Deep, a minor character calls the leads (O2 and Coco) “the new modern day Bonnie and Clyde,” and the film does kind of play at the leads being an urban, hip hop riff on the legendary, real-life crime couple. However, the film has more in common with the 1949 Film-Noir classic, Gun Crazy, which influenced the Warren Beatty-Faye Dunaway film, Bonnie and Clyde. Regardless, Waist Deep is a taunt, gritty, gritty urban drama. With the camera, Vondie Curtis-Hall (who is probably still trying to live down directing the Mariah Carey bomb, Glitter) makes social commentary on poverty and crime in inner city Los Angeles. Through his cast and characters, Hall makes slick-looking pulp cinema that is as rough and as razor’s edge as Pulp Fiction, if not as witty and artful.

The cast plays all their cards well. Tyrese Gibson isn’t a great actor, but he’s a quality leading man and is an excellent fit for roles in guy films (bullets, fisticuffs, and action). Meagan Good has come a long way since playing a teen sweetheart on the late Nickelodeon series, “Cousin Skeeter.” She has the body and the instinct to play a bombshell femme fatale, even if her acting chops are shaky. Rapper The Game is terrible and creepy as the monstrous Big Meat; to see this recording artist play the part with so much edge is to believe that he may have acting talent. Larenz Tate remains the consummate character actor, and, as he has since, Menace II Society, shines as a co-star.

Hall and the tightly written script he co-wrote with Darin Scott does falter in the last 10 minutes of the movie, but before that, Hall must have asked that his cast give it all because the actors come as close to perfection as they could come in a film like Waist Deep. It’s a nifty little crime thriller for when a movie lover wants the nasty edge in inner city crime dramas.