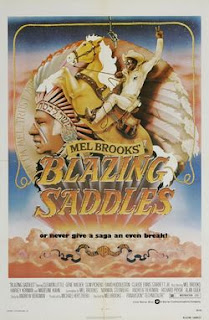 Hedley Lamarr (Harvey Korman), a corrupt political boss, wants to run a railroad through the small western town of Rock Ridge, but he has to ruin the town so its citizens will want to leave. Lamarr appoints a black sheriff named Bart (Cleavon Little), thinking that will certainly demoralize them and make them leave Rock Ridge. Bart, however, joins forces with a washed-up gunfighter Jim (Gene Wilder), also known as The Waco Kid, and becomes Lamarr’s formidable adversary. Lamarr then concocts a plan to have a collection of the vilest criminals, cutthroats, and thieves ravage Rock Ridge. Bart, however, rallies the townspeople (who initially hated having a black sheriff) to a grand stand off against their would be destroyers.

Blazing Saddles is one of the great film comedies (it would certainly make my Top 10), and is still the all-time best parody of movie westerns. Actually, the film takes on a western sub-genre, the horse opera, in which a beleaguered sheriff, all but abandoned by the townsfolk he’s sworn to protect, must stand alone against corrupt, greedy, and murderous men. What really makes Blazing Saddles work as a parody of westerns is that the film really works like a western. It looks and feels like a classic western flick from Hollywood’s golden era of Technicolor westerns. In order for a spoof to work, the spoof has to fell like the thing it’s parodying.

Unlike a lot of parodies, Blazing Saddles also has a plot and solid story structure – a clear beginning, middle, and end, and the characters are excellent. A fine group of character actors also play the parts. Cleavon Little and Gene Wilder are excellent comedians, both fun with a kind of likeable slyness, but Madeline Kahn and Slim Pickens also give bravura performances in small roles that help to define the movie.

Blazing Saddles is funny and brilliant, heavy with belly laughs. Although I’ve encountered many people who don’t like it for various reasons, the is one of the films that firmly established director Mel Brooks as a great American comic, a funny man in any medium.