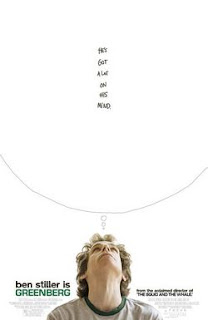 Greenberg is the most recent film from filmmaker Noah Baumbach, the writer/director of the Oscar-nominated films, The Squid and the Whale and Margot at the Wedding. Greenberg focuses on a New Yorker returning to Los Angeles, the place where he grew up, to figure out some things.

Fresh out of a mental institution, 40-year-old Roger Greenberg (Ben Stiller) travels to L.A. to housesit for his brother, 15 years after he left the city. At a crossroads in his life, Roger, a carpenter, hopes to fix his wreck of life, while he fixes some things around his brother’s house. Roger meets his brother’s personal assistant, Florence Marr (Greta Gerwig), a sweet and considerate, but naïve 20-something. Roger needs Florence because he doesn’t drive, and the two begin an awkward relationship. Roger, however, has a quick temper, over-analyzes everything, and does not have a sense of humor when it comes to himself. Can Roger really fix himself?

Greenberg seems more like an extended chapter in a longer story than it does a self-contained film narrative. I have to give Baumbach credit for presenting a character like Greenberg who seems broken beyond repair and who is also funny, but mostly unlikable. I give him even more credit for writing a script and creating a visual narrative that makes Roger Greenberg so interesting and then dares to tackle his complicated ways.

Ben Stiller seems to shape his performance as Greenberg in a way to make readers always want to know more about the character, including his past and even his future. Stiller really sells the idea that Greenberg is broken and in need of repair. Greta Gerwig and Rhys Ifans are also quite good, creating engaging characters whose own stories matter well beyond their connections to the lead, Greenberg.

Like Baumbach’s other films, Greenberg is inimitably human, balancing the fragile with the sturdy and the mundane with the humorous. Baumbach and Stiller give us a wild adventure into the personality and connectivity turmoil of a complicated, complex character. The only problem is that sometimes, writer/director and lead actor hide too much of Greenberg’s nature and thoughts behind a wall of eccentric behavior and petulance. Still, such an all-too-human character in the cinematic world of vapid characters is welcomed.