"The Triplets of Belleville" Not Just Another Animated Movie 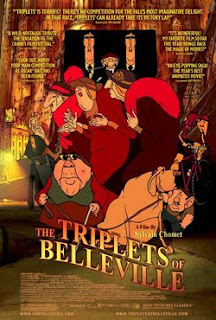 ANIMATION with elements of comedy

Madame Souza discovers that her lonely grandson, Champion, whom she adopted after his parents apparently died, has a love of bicycles. She buys him one and trains him to compete, and years later he enters the Tour de France. During the race, however, two sinister men kidnap him, but Madame, with Champion’s dog Bruno in tow, follows the kidnappers to the great city of Belleville (a surreal version of Manhattan, circa 1930-50). There she meets three odd women, “The Triplets of Belleville,” an aged song and dance team from the days of Fred Astaire. They take her into their home, but can they help her and Bruno rescue Champion?

Les Triplettes des Belleville (The Triplets of Belleville) earned two 2003 Oscar® nominations (“Best Animated Feature” and “Best Music, Original Song”), but lost both including “Best Animated Feature” to Disney/Pixar’s Finding Nemo. Triplets, however, is not geared towards children, nor is its narrative as straightforward as Nemo. Triplets' plot and story are mostly told without dialogue; in fact most of the film’s dialogue is incidental or background conversation.

Almost like a silent film, Triplets has to both be seen and watched. More so than the 3D animation of Nemo, Triplets’ mostly hand drawn animation is the film. It is animation as both art and storytelling. The animation is not only gorgeous, but it is also the narrative. Facial expressions, the way figures move, and character design pretty much tell the story, establish setting, and define the players. It’s all wonderfully done, and deserves that description that occasionally falls on lavishly photographed films – the visual feast. Indeed, Triplets is a sumptuously animated film drawn with such sparkling variety, and that’s good because the plot and story are somewhat anemic. The kidnapping is hardly of any interest, but the pure execution of the animated film is something to behold..

There is something in quality cartoons and animation that greatly pleases the child in us and excites childlike wonder. Dazzling and eye pleasing, The Triplets of Belleville has that something, and it marks its director, Sylvain Chomet, as a filmmaker to watch.