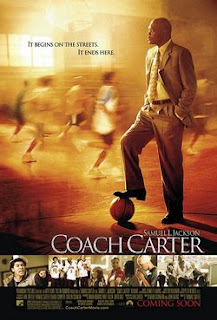 A true story inspires the film, Coach Carter, in which former high school basketball star named Ken Carter (Samuel L. Jackson) takes the job as the head basketball coach at his alma mater, an inner city high school in Richmond, California. The film is not only inspirational, but is also an excellent look at what one person can do when he demands much of young people – the kind of whom no one expects much except prison, dead end jobs, or death by violence. To watch Carter take on a community that believes that playing on a winning team is the last good thing that will happen in the lives of these young athletes is rousing. It’s also depressingly true because so many people think that the only good thing many young black men have is sports; maybe they’re right, but Carter helped a few of them gain a little high ground.

Watching the team play before he formerly accepts the job, Carter is taken aback by the players’ lack of cohesiveness as a team and their disdain for rudimentary basketball skills. After he takes the job as coach of the Richmond High Oilers, he demands that the players respect both himself and one another. In order to stay on the team, the players must each sign a contract promising to attend class, maintain a 2.3 grade point average (they formerly only needed to maintain a 2.0 gpa), and wear a coat and tie on game day. Carter wants the boys to reach for more in life than just basketball, and he wants them to certainly see attending college as a realistically attainable goal. In the real life story, Carter received both high praise and staunch criticism when he made national news for padlocking the Richmond High gym, benching his entire team, and forfeiting games because some had failed to meet the academic requirements of their contract. The community, which had never had a championship basketball team, erupted in dissension when he refused to allow the players access to the gym for the failing to keep up their grades. The movie Coach Carter is a fictionalized account of the events, from the time Carter became Richmond’s coach to the resolution of the lockout.

Coach Carter is very much a basketball movie; although the script frequently delves into the lives of Ken Carter and some of his players off the court, it does so with a mixture of brevity and succinctness. There are nicely played, but rich subplots. One involves a player, Kenyan Stone (Rob Brown), and his girlfriend, Kyra (singer Ashanti), dealing with teen pregnancy. It is tough, heartfelt, and honest, rather than fake, cloying, and sociopolitical; there’s enough in that subplot to be a movie all its own. A second subplot follows Timo Cruz, superbly played by a rising talent, Rick Gonzalez (The Rookie), a troubled young man who almost becomes a victim of Richmond’s drug culture. One plot that was sadly glossed over (or underdeveloped) is the relationship between Ken Carter and his son, Damien Carter (Robert Ri’chard); Damien leaves a prestigious private school and transfers to Richmond to play for his father, much to Coach Carter’s chagrin, at least initially. That’s pretty much where that subplot ends.

The film really doesn’t deal with the opposition to Ken Carter as being villains. The thoughts, feelings, and beliefs of the community aren’t denigrated. In a non-stereotypical fashion, screenwriters Mark Schwain and John Gatins depict people’s disagreements with Ken Carter as the result of them having limited vision. He shows the good and bad of high school sports, and shows how it can exacerbate the reluctance to strive in people who already have narrow dreams. While Schwain and Gatins deal with the character and philosophical issues, director Thomas Carter makes sure Coach Carter works as a basketball movie. The game sequences have an edge-of-the seat feel to them, the kind of verisimilitude that suggests watching live games up close and personal, as if the viewer were actually in the game. That’s probably better than watching the majority of collegiate and pro basketball telecasts.

As usual, Samuel L. Jackson is the consummate professional actor, and he’s played the best African-American disciplinarian since Morgan Freeman in Lean On Me. He’s a star, and he sells this movie to the audience the way Ken Carter sold his athletes on his message – perhaps more so. Although a movie star, Jackson can climb into a fictional character and give it a skin, bringing the fictional to starkly radiant life. It’s evident from the first time Ken Carter confronts Richmond High Principal Garrison (Denise Dowse) who doesn’t see that both she and he, as well the entire school, must ask these young men to reach for more and to believe that they are capable of more than just being basketball players. This is the kind of really good movie that affirms our way of life and the belief in an American dream, and Jackson is the head salesman and best preacher.