The School of Rock is Sweetness Playing Edgy 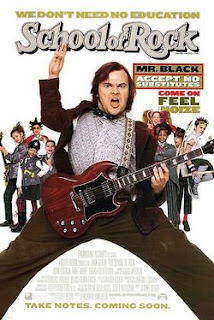 Dewey Finn (Jack Black) is a wannabe rock star kicked out of his own band. Dewey has also been mooching off his roommate, Ned Schneebly (Mike White), a substitute teacher, for years, but Mike’s girlfriend, Patty Di Marco (Sarah Silverman), wants Dewey out of the picture if he doesn’t pay his rent. In need of cash, fortune favors Dewey, when he answers a phone call meant for Ned. Dewey, pretending to be Ned, poses as a substitute teacher at an exclusive prep school. Upon discovering that the students in his particular classroom are quite musically gifted, Dewey tries to turn them into a rock band with himself as the leader. His goal is to enter the upcoming Battle of the Bands contest and win the $20,000 prize. Of course, there are complications.

The School of Rock certainly seems out of place in the filmography of director Richard Linklater, the fine director behind such fabulous films as Before Sunrise, Before Sunset, and Dazed and Confused. However, that this feel-good, warm-hearted, family-friendly comedy actually feels very good, is simply warm-hearted, is nicely family-friendly, and is funny is a testament to Linklater’s skill. This could have been yet another mediocre flick about a rebel who sneaks into the system and teaches the kids (the Socrates motif) to feel good about themselves, believe in themselves, and unleash their creative skills and talents. Yes, it is just another one of those films, but it works because it’s entertaining and ultimately doesn’t seem so contrived.

A lot of the credit goes to Jack Black. His performance is one of sustained madness that is a shaky house of lies built upon a flimsy foundation. Black isn’t just another funny fat guy; he’s also a movie star with an intriguing film personality. So far, he’s basically played the same person, but there is something about him that works on the big screen, even when you realize that the characters he plays are selfish and sneaky suckas. He has a look on his face and a mean glint in his eyes that suggest he deserves watching; for some reason it works.