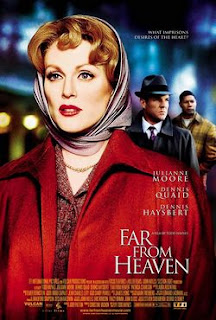 Last year (2002), a number of people thought that mean old Halle Berry had stolen her Best Actress Oscar for Monster’s Ball from Nicole Kidman for Kidman’s performance in the overblown and somewhat empty Moulin Rouge!. This year, Nicole finally received an Oscar for her performance in the tepid and mediocre The Hours, but she may have been the thief this time. Julianne Moore gives a rich and lush performance as a 1950’s era housewife facing a philandering husband and the era’s strict racial and social mores in Todd Haynes’s Far From Heaven, a film that may have touched too close to home for many in Hollywood's hypocritical, closed, and bigoted community.

Cathy Whitaker (Julianne Moore) is the dream housewife living the dream version of the American dream. Her husband, Frank (Dennis Quaid), has a hot advertising executive job, and together, they have a huge two-story home and two adorable children. They fill their lives with the latest consumer goods, and they throw fancy, catered affairs for their ritzy, upper middle class friends. However, Frank has a skeleton in the closet with him; he’s gay, and he is having an increasingly difficult time suppressing his need to press male flesh. As her marital crisis worsens, Cathy turns to her gardener, Raymond Deagan (Dennis Haysbert), a strapping hunk of black manhood, for comfort. That relationship doesn’t sit well with cracker and spearchunker alike, and racial tensions, which had been on the down low, simmer and threaten to boil over.

Todd Haynes (Velvet Goldmine) made Far From Heaven a kind of homage to the slick melodramatic films of the 1950’s, in particular the work of director Douglas Sirk. Sirk’s work was ignored for years after his heyday, but he always had a cult following. In the last few decades, many have given his films a more critical and careful review, especially his infamous color remake of the old black and white film, Imitation of Life. Far From Heaven apparently borrows liberally from Sirk’s film, All That Heaven Allows, in which a socialite also falls for her gardener.

Heaven magnificently captures the amazingly rich and colorful look of Technicolor films. It’s like watching a movie from another era, from the impressionistic palette of the photography and the opulent art direction to the lavish costumes and Elmer Bernstein’s fabulous score. It is hard to believe that someone could capture the lost look of the Fifties melodrama, but Haynes ably puts it together.

Haynes’s really impressed me with his script. While he manages to capture the social and personal heat that filmmakers hid under the surface of their films in the 50’s, he also writes a story that revels in and openly mocks the hypocrisy of the supposedly enlightened America of that time. By the 1950’s, the United Stated considered itself the greatest nation on the face of the earth, a land awash in freedom and opportunity, when in reality, freedom and opportunity were simply catch phrases for the powerful sold to the powerless.

Although the film is set in the 1950’s and portrays 50’s era prejudices, the film is perfect for this time, as well as a clear reflection of a past time. Watching Frank Whitaker struggle with his sexuality and watching Cathy and Raymond be persecuted for their friendship, you can’t help but realize that things have not changed. Homosexuality is still taboo today, and many well-known political and public figures still refer to homosexuality as the most heinous sin of all. Interracial friendships of any kind are still call attention to themselves and still cause many people to frown. Today, we give the alleged acceptance of the gay lifestyle and color-blind friendships lip service. However, modern American society is still almost as stuck in the mud as the one portrayed in Heaven.

As good as Haynes and his technical cohorts are in recreating a film that looks like it came from an movie era almost half a century gone, the people who make Far From Heaven more than just a grand technical achievement are the actors. Ms. Moore makes Cathy a charming character, a generous woman with an open heart and a good spirit. She easily rides the good times, but she makes it through the tough; she has to, as we know by the title, that all doesn’t end so very chipper. I was amazed by her performance. She made Cathy’s happiness and satisfaction with her life not just a façade, but the real thing.

So often, middle class housewives are played as secretly unhappy, but Cathy is quiet content; in fact, she adores her life, and she does her best to stay happy even when she encounters difficulty. I’m sure many would consider it politically incorrect to portray a housewife as a strong heroine, fighting to save her marriage, family, and lifestyle Julianne Moore makes you believe; she makes you root for Cathy. She even drew me into the character, so that I felt like I was experiencing every joy, every pain, and every slight that Cathy experienced. What more can one ask of a performer other than that she make you believe and feel?

A lot of people always knew that Dennis Quaid was a very good actor; somehow, a fair assessment of his talent kept getting lost because of his good looks and tomcatting lifestyle. It takes a movie like this and The Rookie to show us what an underrated talent he is. Quaid makes Frank both pathetic and sympathetic – quite complex. He doesn’t allow the viewer to always make an easy assessment of Frank. He’s just a man in a complicated situation fighting his own complications within himself.

Next to Cathy, the best character in this film is Raymond the gardener. He’s a noble Negro full of wisdom, and, at first, that might seem so typical – quiet suffering black man, so strong in the face of silly racism. However, that stereotype is a deliberate creation of Haynes, and Haysbert pulls it off with disarming charm and the knack of a skilled movie thespian. In the kind of film Haynes recreates, Raymond would have been noble, like the God-loving housekeeper in Imitation of Life. Here, the point isn’t his nobility; Raymond simply has to be strong, like Cathy, to survive the slings and arrows of outrageous hypocrites. Somehow, the proper acclaim for Haysbert in this role was nonexistent.

Do you realize that of all the post-season film awards, only the Golden Satellite Awards (as of this writing) recognized Haysbert’s performance with even a nomination (which he also won)? What up? Were (dumb) white critics and voters just too color struck (and dense) to notice the subtlety of both character and performance in Raymond’s case? Or do they feel that awards for Halle and Denzel pretty much take care of awarding darkies for film roles for another decade or so?

Give Far From Heaven a viewing. Not only is it relevant, but it’s quite entertaining with beautiful performances; Julianne Moore’s alone is worth a look. It’s also one of the best films about the culture of class and racial hypocrisy that you’ll ever see.