Fantastic "Exit Through the Gift Shop" a Strange Art Movie 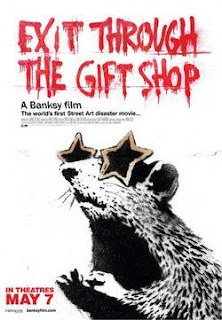 Exit Through the Gift Shop is a documentary that largely focuses on Thierry Guetta, a French immigrant to Los Angeles. Although he was a successful small businessman, Guetta also had an obsession with carrying his camera everywhere and constantly filming his surroundings – from inside his home and business (a vintage clothing store) to outside in public. On holiday in France, Guetta discovers that one of his cousins is Invader, an internationally known street artist.

Fascinated by his cousin’s art, Guetta turns his camera on the street artists and eventually meets such street art luminaries as Shepard Fairey (who created the Barack Obama “HOPE” poster), Borf, Ron English, and Buffmonster, among others. Eventually, Guetta attempts to make a documentary film from all the footage he has shot of street artists. After meeting the secretive and legendary Banksy, a British graffiti artist, stencil artist, and painter, Guetta’s project takes a surprising twist. Banksy takes over the filmmaking duties, and Guetta reinvents himself as the street artist “Mr. Brainwash” (or MBW).

There has been some speculation that Exit Through the Gift Shop is one big prank – the documentary film about street art that is essentially graffiti on the body politic of documentary filmmaking. This film could also be seen as a satire of the art scene and of media hype, especially hype around artistic or cultural events. However, as brief as this film is, Exit Through the Gift Shop does capture the mesmerizing power of art and also the ability of artists, especially rebels and innovators, to capture the public’s imagination.

Exit Through the Gift Shop heaps scorn on practically everyone who appears in the film and anyone who is involved in this narrative. In a subtle way, it disapproves of the way underground and outsider art has become commercialized, just another thing for rich people to co-opt with their cash. Is street art just more pop art? Still, the film cannot hide the fact that people are genuinely fascinated by art: arguing about art, deciding what constitutes art, and depicting how artists can astonish with the surprising mediums they use to present their art.

Whatever the truth is about the validity of the film’s content and subject matter, Exit Through the Gift Shop does something many films have a difficult time doing, captivating the audience from beginning to end. Its only fault may be that it doesn’t give us more of its delightful subjects and characters.