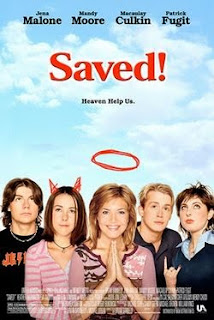 Mary (Jena Malone) is a devout senior at American Eagle Christian High School who believes that Jesus protects her and guides her every action. She’s also part of a group of devout, young women who lead kind of a campus crusade discouraging other students from backsliding (sinning and going away from their Christian faith), and Jean really follows of the example of group leader Hilary Faye (Mandy Moore), a perky, holier-than-thou, and sanctimonious campus crusader.

The shit hits the fan when Mary discovers that her boyfriend, Dean (Chad Faust), is gay. She prays deeply and comes to believe that Jesus want her to sacrifice her virginity to have sex with Dean to cure him of his homosexuality. Not only does she not cure him, she ends up pregnant. When she learns of her condition and that God won’t restore her…cherry…or wholeness, she begins to look at her peers and faith in an entirely different light. She leaves Hilary and her holy girls and strikes up a friendship with Hilary’s wheelchair-bound brother, Roland (Macaulay Culkin), and the school’s lone Jewish student, a rebellious girl named Cassandra (Eva Amurri). She also falls for Patrick (Patrick Fugit), the son of the self-righteous school principal Pastor Skip (Martin Donovan).

Co-produced by R.E.M. lead singer Michael Stipe, director/co-writer Brian Dannelly’s Saved! is a dark coming of age story, and Dannelly came to bust up on the white American Christian subculture. The film isn’t mean-spirited; actually, Saved! has a far more generous Christian tone than many Christian media personalities and a certain “passionate” film. The satire is sharp, but it’s aimed at a message of tolerance and forgiveness. Saved! doesn’t “poo-poo” sin; it simply asks that people be more mature about how they regard sin. It’s as if Dannelly and co-screenwriter Michael Urban are encourage self-examination, forgiveness, and self-awareness of what Jesus’ message really means to people. They aim the satire and poke fun at intolerance, self-righteousness, and those who see the splinter in the eye of another, but not the logs in their own eyes.

The acting really sells the movie. Mandy Moore surprised me by how energetically she embraced her role. She makes Hilary Faye villainous rather than a villain, so that Hilary can get the same chance at redemption that she denies others. Of course, there’s the added delight of seeing Macaulay Culkin, who is a good (but not a stand out) actor, and who has the kind of screen chemistry that makes him a star. Truthfully, every scene in which he appears, the camera seems to center on him. His pull is like the tug of a cinematic dwarf star.

I only had issues with the somewhat puff piece ending, and how Saved! softly served the way fanatics under duress tend to act, but the film made its point. And no satire of Christians was ever so…Christian.