Emma Stone Gets an A for "Easy A" 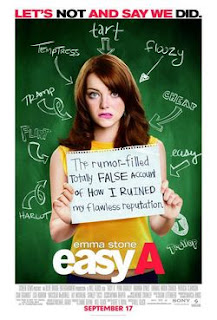 The recent teen comedy, Easy A, takes as its inspiration the classic American novel, The Scarlet Letter (1850), written by Nathaniel Hawthorne. Easy A focuses on a clean-cut high school student who uses rumor and innuendo to improve her social status at school.

At Ojai North High School, no one really notices Olive Penderghast (Emma Stone), except her bitchy best friend, Rhiannon Abernathy (Aly Michalka). It is to Rhiannon that Olive lies about losing her virginity to a college student, and, in what seems like an instant, that little white lie is all over campus. This causes Olive to run afoul of the campus Christian crusader, Marianne Bryant (Amanda Bynes). Olive compounds that first lie by helping Brandon (Dan Byrd), her gay friend who is being bullied, stage an act to trick their fellow students into believing that Dan is now straight. Soon, however, Olive learns that being the talk of the school isn’t necessarily a good thing – especially when the talk is that you are easy and a whore.

Although it belongs to the well-worn teen comedy genre, Easy A is fresh and spry. Much of the credit for that should go to the film’s star, Emma Stone, who comes across as being much more mature than her age (22) would suggest. This film’s plot, pacing, and philosophy flow through her, and Stone handles it with ease, talent, and uncommon professionalism for an actress her age.

The other thing that makes Easy A seem different is that it is real or tells its tale by dealing with issues and situations confronted by real teenagers. Director Will Gluck and screenwriter Bert V. Royal are able to mine so much excellent comedy, humor, and satire from that realism. Easy A rips people apart for being so hypocritical and judgmental. It derives humor not only from that, but also from the fact that people are often critical of others to cover for something about themselves they don’t like.

The film understands that the complicated, rough and tumble politics of high school are a microcosm of what happens in the larger world. We all want to be accepted and loved, and yes, we will use other people and tell lies to get our way.

Easy A is brutally honest and funny. Sometimes, it isn’t as clever as the filmmakers think it is, which makes the film awkward, especially in the last act. Still, I give this movie credit for being a teen film that tackles the high school rumor mill and social ladder with such sparkling wit and lack of political correctness. Easy A envisions teen angst and the high school drama from a different angle, and the reward for watching it is a memorably good time at the movies.