The Squid and the Whale Finds Comedy in Pain 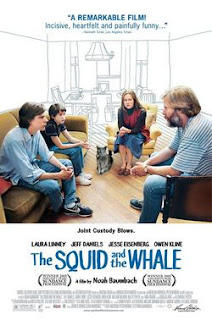 16-year old Walt Berkman (Jesse Eisenberg) and his 12-year old brother, Frank (Owen Kline), find themselves caught in the middle of their parents’ separation. Their dad, Bernard (Jeff Daniels), is a Brooklyn professor and writer who seems well past his prime as an author. Their mother, Joan (Laura Linney), is a writer with a burgeoning career. In fact, Joan is on the brink of stardom as she has a book deal, and The New Yorker is publishing an excerpt from her novel.

The Squid and the Whale is writer/director Noah Baumbach’s fictional account of his own parents; divorce. Of course, that sounds like an interest-killer, but Baumbach’s film is free of the kind of phony and cloying melodrama that often hampers even the best movies about divorce (or TV movies, that matter), simply because the filmmakers usually have “the best intentions” and “mean well” when such films. What probably makes The Squid and the Whale so good is that it is not only brutally frank and sometimes too frankly honest, but the film is also excruciating even in moments of levity. Divorce can be (very) destructive and painful, and just tears at the confidence and self-image of those involved. Baumbach is not out to provide cures, but to tell a riveting story.

The performances are… strong – no need of any special adjectives; they’re just strong. Jeff Daniels, more talented than most A-list stars, but lesser known than some “B-listers,” is haunting and hilarious as an academic whose fortunes have been on their way down for years. His Bernard Berkman (based on Baumbach’s father, the author Jonathan Baumbach) is hilarious in his intellectual snobbery and pathetic in his absolute belief that one shouldn’t engage in any endeavor unless there is the absolute guarantee of being an elite. Laura Linney’s Joan Berkman is a bit difficult to read. Complex and revealing her long held streak of independence, Linney’s Joan is one of the best and most fully realized female characters in recent memory. Joan is neither villain nor hero, but a person who wishes to have a life of her own not impeded by the sensitivities of insecure males.

The real stars of this film are Jesse Eisenberg and Owen Kline (the son of Phoebe Cates and Kevin Kline) as the Berkmans’ children. Jesse ably creates Walt as a mimic of his father, and then shows him struggling to gain his own footing and identity, even as he seems to have whole-heartedly bought into Bernard’s superiority and snobbery. Owen is so intriguing as Frank, a sly imp as curious as a cat and one who dispenses information with the cunningness of a Beltway reporter.

As well made as The Squid and the Whale is, the film has an impeccable blueprint in its screenplay. Baumbach’s writing is the family drama as farce, but with an honest examination of love, family bonds, and dependency is jeopardy. There are no villains, just people, and if the film via its script has a weakness, it’s that it is so narrow. The end of the film shows promise for even richer characters and story, but still, what The Squid and the Whale does give us is extraordinary – an almost divine human comedy.