Jennifer Lawrence is a Star Born in "Winter's Bone" 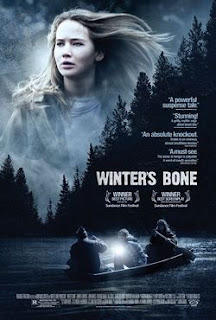 One of the best things about independent films is the chance to see movie stars and big-time actors appear in films that are not standard Hollywood fare. Independent films are also the place to see actors deliver breakthrough performances that make them stand out to critics and audiences that may not have taken notice of them in earlier performances. In Winter’s Bone, actress Jennifer Lawrence, whose biggest acting gig prior to this was playing a daughter in TBS’ cancelled family sitcom, The Bill Engvall Show, made me take notice of her talent.

Lawrence plays Ree Dolly, a 17-year-old Ozark Mountain girl searching for her missing father, a crystal meth maker. Ree is essentially the adult in her dirt poor family, taking care of her younger brother, Sonny (Isaiah Stone), and younger sister, Ashlee (Ashlee Thompson), because her mother is largely incapacitated. Ree is informed that her father put up their (rundown) house and property as collateral for his bail and if he misses his trial date, Ree’s family will lose it all.

To find her father, Ree will have to take her search deep into the dangerous social terrain of the region she calls home. It is a world populated by paranoid locals deeply involved in the drug trade and in the manufacture of crystal meth. Undaunted, Ree asks questions and pokes around, and the only person helping her is her father’s unstable brother, Teardrop, played by John Hawkes (who gives this film its other standout performance).

Winter’s Bone deals with a number of themes: family ties (close and distant), rural poverty, and the power of gossip in small communities, among others. The strength of the film, however, is Jennifer Lawrence. More than the setting, she makes this story seem real and authentic – very real and authentic. This movie has moments of humor and genuine warmth to go with scenes that evoke fear and revulsion, and they all center on Lawrence for their strength. Lawrence best personifies the power visuals can have late in this movie when she must depict Ree’s emotions during the ultimate moment of her search.

At times, Winter’s Bone seems like the classic private investigator paradigm set deep in the woods, and at other times, it is like an urban thriller focusing on a crime syndicate or drug dealers, but replacing the concrete jungle with woods, shanty shacks, and trailers. That is how successful director Debra Granik (Down to the Bone) is at making this drama seem like something more – a character drama that is as chilling and thrilling as it is poignant. Jennifer Lawrence, who will appear in next year’s “X-Men: First Class,” is the budding star through which Granik channels the power of this story. Hopefully, Winter’s Bone will have another breakthrough – a larger audience.

Posted by Leroy Douresseaux at 11:21 AM