A Year Later, Walt Disney's The Princess and the Frog Still Magical 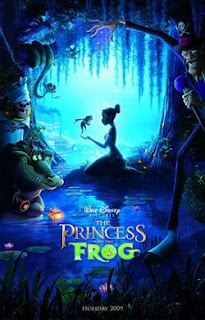 Several years ago, Walt Disney announced that 2004’s Home on the Range would be the company’s last 2D animated (or hand drawn animation) feature length film because, the company insisted, audiences now wanted 3D or computer animated films. But praise God for Ed Catmull and John Lasseter! Taking over Walt Disney Animation Studios in 2007, the duo behind Pixar spearheaded the return to 2D. The result is the fantastic, The Princess and the Frog. In development since 2006, The Princess and the Frog not only marks the return to traditional 2D hand-drawn animation, but it is also the return of the Disney musical in the vein of Beauty and the Beast.

A musical comedy and fantasy, The Princess and the Frog is set in an idealized version of the city of New Orleans of the 1920s. Tiana (Anika Noni Rose) comes from hardworking parents: the strong and loving father, James (Terrence Howard), and her mother the inspiration and anchor, Eudora (Oprah Winfrey). Tiana’s dream is to open New Orleans’ finest restaurant. Believing like her father that wishes don’t come true without hard work, Tiana eschews fun and works double shifts to save money.

Spoiled and irresponsible, Prince Naveen (Bruno Campos), from the far-off kingdom of Maldonia, arrives in New Orleans, cut off from his parents’ money. Naveen meets Dr. Facilier (Keith David), “the Shadowman.” Facilier transforms Prince Naveen into a frog as part of a scheme to steal a local rich man’s money. When Tiana and froggy Prince Naveen’s meet, Naveen convinces Tiana that her kiss can make him human again. However, in a twist on the Grimm brothers’ fairy tale, “The Frog Prince,” the kiss leaves Naveen unchanged, but instead also transforms Tiana into a frog. With the assistance of Louis, a trumpet-playing alligator (Michael-Leon Wooley) and Ray, a Cajun firefly (Jim Cummings), Tiana and Naveen race against time to Mama Odie (Jenifer Lewis), the bayou-dwelling ancient who has the power to undo Facilier’s spell.

The Princess and the Frog is a Disney animation first – the lead is an African-American heroine (the Black Disney princess). However, one could be forgiven for forgetting that fact while watching this movie. Under the direction of the revered team of John Musker and Ron Clements (The Little Mermaid, Aladdin), The Princess and the Frog is so amazing, it almost makes you forget the historical and social implications. Even the Black princess not having a Black prince is no big deal when placed in the context of this magical film.

Musker and Clements have certainly put together an animated film that is every bit as visually impressive as modern animation, including Pixar’s 3D wonderland, Up. Most importantly, this stands next to the best of Disney’s modern, hand-drawn animated films. The Princess and the Frog has the shimmering colors of Beauty and the Beast and meaningful drama of The Lion King.

Oscar winner Randy Newman’s excellent score and bouncy musical numbers recall the melodious, song-driven narratives that made Disney’s late 80’s and early 90s films like The Little Mermaid and Aladdin timeless classics. From songs about gumption (“Almost There”) and optimism (“When We’re Human”) to the dueling natures of the dark side (“Friends on the Other Side”) and the light side (“Dig a Little Deeper”), The Princess and the Frog tells its story and conveys its messages as much through songs as it does through its superbly written story and screenplay.

For all its outstanding animation – from the stunning character animation to the glorious special effects that will make you believe in magic (Disney magic!), this film lives through a cast of voice actors that just wows, and few of the actors are big-name stars (except for Queen of the World, Ms. Winfrey). Anika Noni Rose defines the patient, lovely, industrious, entrepreneurial young woman that is Tiana; Rose brings the character to life in such a way that makes Tiana seem like a real person. Keith David, the actor most under utilized by Hollywood, makes a delightfully macabre turn as Dr. Facilier, a villain with the right amount of wicked and just enough comic undertones to fit this family friend film. The show-stealer is Michael-Leon Wooley as Louis, the jazz-loving alligator, who is so funny and so good that it defies description.

Walt Disney Animation Studio may never again have a 2D animation blockbuster on the level of 1994’s The Lion King. On the other hand, as the dominant theme of this film frequently reminds us, one cannot simply wish for something and hope it comes true; one has to work to make that wish come true. The hard work that went into this film made the wishes of fans of 2D animation come true. The Princess and the Frog is a Disney classic both groundbreaking and marvelous.

Posted by Leroy Douresseaux at 5:06 AM