The Scorpion King Does the Conan Thing 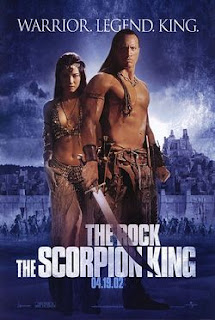 A group of beleaguered chieftains hire an assassin named Mathayus (Dwayne “The Rock” Johnson) to kill Cassandra the Sorceress (Kelly Hu), the soothsayer of the chieftains’ mortal enemy Memnon (Steven Brand). Along the way, Mathayus and Cassandra come to a mutual understanding, and a rival of Mathayus, Balthazar (Michael Clarke Duncan) joins their cause. All Mathayus has to do is defeat Memnon to bring peace to the region.

Directed by Chuck Russell (The Mask, Eraser), The Scorpion King is a spin-off from The Mummy 2, in which The Rock played The Scorpion King as a resurrected villain. Russell keeps the energy high, and turns his film into a wall-to-wall chase and rescue, hard-core fight movie. Russell wisely plays up to The Rock’s skills as a professional wrestler with the World Wrestling Federation. Nary a dull moment, King is a pumped up, more visceral version of Conan the Barbarian.

The acting is, of course, not great, but it perfectly serves the purpose of the movie. Despite a few lapses, The Rock is very entertaining and convincing as Mathayus, and since he does all his own stunts, he lends credibility to his portrayal. When he puts up his dukes or lifts a weapon, you can feel the energy level of the film soar.

The supporting cast is also good. Brand drips menace as the evil Memnon, an intensity he maintains throughout the film. Kelly Hu as the Sorceress is sexy, mysterious, and is more than a female tag along. As Balthazar, Duncan adds an air of credibility to the acting in the film.

As exciting as it is, The Scorpion King is also quite funny. It makes no pretensions; it is a good time, popcorn flick that is quite well made. It delivers by maintaining the action, humor, and excitement. It is one of those movies that is true to the good time it promises to be. It is a good time at the movies, and it will bear repeated viewings on home video.