Meet the Fockers Just Wants to Make You Laugh... Nothing More 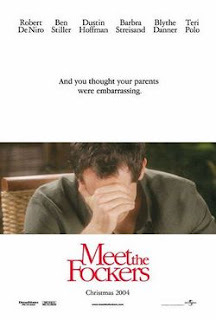 In 2000’s Meet the Parents, “Greg” Gaylord Focker (Ben Stiller) meets his girlfriend Pam Byrne’s (Teri Polo) parents, Jack (Robert De Niro) and Dina Byrnes (Blythe Danner), but Jack Byrnes is the suspicious father that is every date’s worst nightmare. Much hilarity ensued as Greg tried to earn Jack, a retired CIA officer’s, trust. Four years later, here comes the sequel, Meet the Fockers (the MPAA allegedly demanded that the studio find a family with Focker as a real last name before they allowed the name to be in the film’s title.), and this time Greg and Pam are planning marriage. Jack has more or less grown to accept Greg, mainly because most of his attention is currently on his grandson, Little Jack (Spencer and Bradley Pickren), whom the Byrne’s are sitting while his parents are away.

So it’s time for the Byrnes to meet the Fockers, Greg’s parents, Bernie (Dustin Hoffman) and Roz (Barbra Streisand). Greg and Pam join her parents for the long road trip to Miami where the Bernie and Roz live, and while the trip goes well, the initial meeting between the two sets of parents goes a little awry. That’s just a taste of troublesome things to come, especially after Jack learns that Greg has a few bombshell secrets that Greg’s trying to hide in order to stay in Jack’s vaunted “circle of trust.”

Meet the Fockers is exceedingly funny, although also deeply shallow. The film’s vulgar and crude comedy matches such teen and twenty-something favorites as There’s Something About Mary and American Pie for raunchiness. Meet the Fockers was a giant hit over the 2004 Christmas holidays and well into 2005 because it is ostensibly a family comedy with a lot of belly laughs and plenty of outrageous humor – some of it capable of chasing prudes out of the theatre. Still, the screenwriters and the cast, who are so game to play this script to the hilt, are to be commended for making great humor out of incidents, misunderstandings, misfires, miscalculations, etc. that would bring real families to the brink of a war of the relatives.

Ben Stiller, coolly playing the straight man, keeps this movie sane. Robert De Niro is too intense and actually makes his character hateful, except for the opening and closing scenes. Dustin Hoffman alternates between being annoying and funny. Barbra Streisand is a comedy dynamo, and shows a side of her talent that hasn’t been seen much the last 20 years or so – that of the delightful comedienne. Overall, Meet the Fockers gives much laughter for its value, whether you see it at home or in a theatre. In fact, this is a must-see for people who just want to watch a movie that will make them laugh.

Posted by Leroy Douresseaux at 1:17 PM