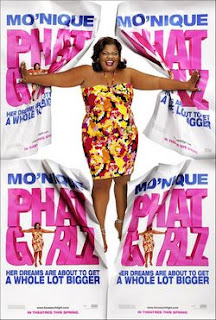 COMEDY with elements of drama, fantasy, and romance

Actress/comedian Mo’Nique has her biggest headlining role to date in the new film, Phat Girlz, in which she plays a phat girl or big girl who is struggling to find love in an America where skinny girls with “hot bodies” get all the attention and where many treat overweight women like refuse.

Jazmin Biltmore (Mo’Nique) is an aspiring fashion designer with a smart mouth, working at a clothing store during the day and designing fashions for plus-size women at night. However, Jazmin has low self-esteem and yearns for the kind of man she never really believes she’ll get. Her closest friend and coworker, Stacey (Kendra C. Johnson), is also a bit on the heavy side and also yearning for a lover. Meanwhile, Jazmin’s cousin, Mia (Joyful Drake), with whom she grew up, is a skinny girl who gets all the attention. That changes when Jazmin wins a holiday for three at a resort hotel, where the Jazmin, Stacey, and Mia meet a trio of Nigerian doctors. The doctors take an immediate liking to the plus size Jazmin and Stacey. One of the doctors, Tunde (Jimmy Jean-Louis), falls madly in love with Jazmin. Jazmin, however, has serious issues, and that endangers her happiness, her career dreams, and perhaps a shot at the man of her dreams – a man not turned off by her weight.

Phat Girlz is plainly and simply a film that is meant to make fat women (plus size, big girls, heavy girls, etc.) feel good about themselves. Embodied by the bold Mo’Nique, Jazmin fights back and is unwilling to take insults from skinny people, especially skinny women. The film is basically a romance novel for overweight women turned into an emotionally charged, super-duper, feel-good film for big women. Phat Girlz is heavy on comedy, and watching Mo’Nique, literally and figuratively, throw her weight around (as she often does in her stage act and did in her late TV series, “The Parkers”) is fun. Eventually, the film does dissolve into a melodrama full of hysterics; then, it turns into a pure fantasy about the big girl who gets everything she wants because she persevered.

That’s nice, for the most part. Technically, writer/director Nnegest Likké does a credible job helming the film, although Phat Girlz wears its low budget heart on its sleeves. The photography is ultra low grade; I’ve seen cheapo rap music videos from regional rappers with more polish. But in the end, Phat Girlz is the movie candy for which plus size women have been waiting a long time. It’s a call to arms and a hearty pat on the back that doesn’t necessarily demonize skinny people – just the ones who demonize phat girlz.