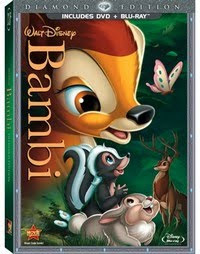 DISNEY ADDS A NEW GEM TO THE BLU-RAY™ DIAMOND COLLECTION
Walt Disney’s BAMBI Diamond Edition
Releases From The Disney Vault on March 1, 2011
Burbank, Calif., December, 2010 – The Walt Disney Studios proudly announces the addition of BAMBI to its coveted, cutting-edge Blu-ray™ Diamond Collection line-up of Disney’s greatest animated-classics. Released from the Disney vault for a limited time only, BAMBI Diamond Edition features the loveable and adorable wide-eyed fawn and his forest friends in Blu-ray high-definition on March 1, 2011.

The Diamond Edition debut of BAMBI, Walt’s fifth full-length animated classic, is an endearing tale about a young prince of the forest who learns valuable life-lessons about friendship, love, and the miracle of life. The movie is a must-own coming-of-age story that Walt Disney Studios Home Entertainment has especially packaged with families in mind - providing the ultimate, interactive hi-def home entertainment experience with a newly enhanced digital restoration, enhanced picture and sound, games, activities and more.

Disney’s new “Second Screen” technology, which is being introduced for the very first time on the BAMBI Diamond Edition release, will further transform the at-home movie watching experience by empowering viewers with the ability to engage with film content on multiple media platforms and bring them to life in their own hands at the touch of a button. By simply downloading the new Disney Second Screen App onto an internet-connected computer or iPad™* and synching it to the movie, consumers will instantly be able to dive deeper into the film by engaging with fun interactive elements like animated flipbooks, galleries, photos, trivia and more.

Film Synopsis: As morning light breaks across the meadow, a young deer named Bambi is born and hailed as ‘Prince of the Forest.’ Soon Bambi emerges from the thicket on wobbly legs, much to the delight of his new friends, Thumper, the playful rabbit, and Flower, the bashful yet lovable skunk. But the fun of nibbling on fresh blossoms and frolicking through the woods is only the beginning. Exploring his new world, and guided by the wisdom of Friend Owl, Bambi learns valuable life lessons with every adventure – experiencing the power of friendship, family, and love along the away.

The Making of the Film: BAMBI was Walt Disney’s fifth animated full-length feature film which released in 1942 during World War II and took approximately five years in the making due to the exquisite artwork and attention to detail of each and every scene, character and figure. The artwork itself was created by some of the legendary “nine old men,” including Frank Thomas, Ollie Johnston, Marc Davis, Milt Kahl and Eric Larson and in order to achieve the film’s unprecedented level of realism, animators modeled anatomical studies using live animals (including a pair of fawns named Bambi and Faline) and imbued each with a uniquely endearing personality. Bambi’s delightful forest home received the same painstaking attention to detail, as background artists painted hundreds of landscapes based on extensive field research and nature photographs.

Film Accolades: BAMBI was nominated for three Academy Awards® for Best Song (“Love Is a Song,”), Best Sound Recording, and Best Music Score of a Dramatic or Comedy Picture. To date, BAMBI is No. 3 on the list of American Film Institute’s Top 10 Animated Films of All Times. And in 2004, the movie was commemorated with a first-class U.S. postage stamp and in the 1990’s the film inspired astronomers to name a pair of asteroids after the adorable characters – Thumper (April 20, 1993) and Bambi (October 17, 1995).

Bonus Features:
Backstage Disney:
· Inside Walt’s Story Meetings-Enhanced Edition - A fascinating, multi-tiered, interactive story-telling experience. Go back in time with dramatic voice re-enactments of the moments with Walt that led to the creation of this classic film.
· 2 Never Before Seen Deleted Scenes
· Deleted Song: “Twitterpated”
· Blu-ray Galleries—A collection of the extraordinary images originally created as part of the design process for BAMBI.

Classic DVD Bonus Features:
· The Making Of BAMBI: A Prince Is Born—A comprehensive look at the making of BAMBI covers the story, the characters, the actors, the art design, the music and the history of Walt Disney’s classic film using behind the scenes footage, production stills, animation, artwork and multiple interviews withperformers and behind the scenes participants.
· Tricks of the Trade (excerpt)—In an episode from the 1957 Disneyland TV show, Walt narrates the story of the multiplane camera, an animation innovation crucial to the production of BAMBI.
· Inside the Disney Archives—Disney Supervising Animator Andreas Deja guides viewers through Disney’s Animation Research Library, where artwork from past Disney animated feature films is stored, including early story sketches of Bobo the rabbit,” (who became Thumper), glass paintings made for the multiplane camera and more.
· The Old Mill—Winner of the 1937 Academy Award® for Best Short Subject/Cartoon, The Old Mill was a testing ground for several techniques critical to Walt’s artistic vision for BAMBI, including the multiplane camera, animating realistic animals and experimenting with such natural occurrences such as wind, rain and lightning.
· DisneyPedia: Bambi’s Forest Friends


About Disney’s Blu-ray™ Diamond Collection:
Disney’s Blu-ray™ Diamond Collection represents The Walt Disney Studio’s most prestigious animated classics. The Collection will be comprised with many of Walt Disney’s most treasured animated classic titles to be released through 2016. These titles represent the highest level of picture and sound, feature groundbreaking, state-of-the-art immersive bonus content, and include unprecedented levels of interactivity, personalization and customization, made possible because of Blu-ray technology.