"Red" is Riotous, Entertaining and Damn-good 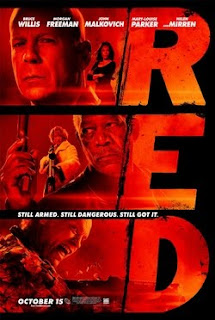 ACTION/COMEDY with elements of drama and romance

Bruce Willis is one of the world’s biggest movie stars of the last quarter century. Perhaps, that status makes people forget that not only is Willis a great action movie star, but he is also a fine actor, also comfortable with character drama and comedy. At least, I think so. In his recent, Fall-released action comedy, Red (based upon the comic book miniseries of the same name by Warren Ellis and Cully Hammer), Willis shows all his sides – subtle drama, deadpan humor, and action flick stud.

Red focuses on Frank Moses (Bruce Willis), a former black-ops CIA agent living a quite, idyllic life of retirement in the suburbs. When he feels lonely, he chats with Sarah Ross (Mary-Louise Parker), a customer service agent at the office that sends out Frank’s pension checks. When an assassin squad comes gunning for him, however, Frank is forced to go on the run, with Sarah in tow. Frank is RED – retired, extremely dangerous, and someone powerful wants him dead. Frank needs answers.

To survive, Frank tracks down members of his old black-ops squad. There is his old mentor, Joe Matheson (Morgan Freeman), living in a retirement home in New Orleans, someone who can give Frank information. Marvin Boggs (John Malkovich) is a paranoid conspiracy theorist, who can give him more information. Victoria (Helen Mirren), a wetwork agent (assassin), can give comfort and aid. Then, there is William Cooper (Karl Urban), who is the CIA agent assigned to hunt and kill Frank. Cooper is kind of like a younger version of Frank, and he won’t let anything stop him.

Red is one of those films that can be described as “a non-stop thrill ride,” which it is for the most part. The car chases, shootouts, fights, and other action scenes are quite good, and often funny, not because they are parody, but because the action always manages to embody the absurdity of this story.

The characters are okay, but the actors are the ones that make them better. Performers like Morgan Freeman, Helen Mirren, and John Malkovich are so good that they can both give life to flat characters and play up the comic aspects of a scene or situation with ease. They make the often-extremely violent Red seem witty and effervescent. Yes, even Bruce Willis has done this kind of character (the killer) in other movies (like The Whole Nine Yards), but here, he is cool like a movie star should be. This is the kind of movie that needs a movie star lead, and Willis provides that.

Red is not perfect. Sometimes, it doesn’t know if it wants to be extremely dangerous or extremely funny, but action comedies like this: more snarky than smart and filled with comic violence that actually looks like real action movie violence, don’t come around often enough. Red is probably the best action comedy of the year.

Posted by Leroy Douresseaux at 8:13 AM