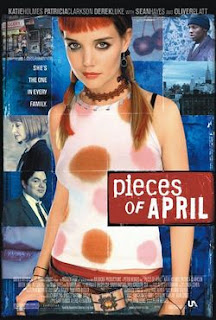 DRAMA/FAMILY with some elements of comedy

We’re all familiar with Christmas movies or even the generally labeled “holiday movie,” which (I guess) is supposed to cover the entire “holiday season,” ostensibly Thanksgiving to New Years Day. Are there films we can label as genuine Thanksgiving Day films – films dedicated to that day and have little or nothing to do with Christmas?

Now, Peter Hedges’ Pieces of April can join any existent shortlist of great Thanksgiving Day films. It’s the story of April Burns (Katie Holmes), who invites her family to Thanksgiving dinner at her teeny apartment on New York’s Lower East Side. April has a history of bad behavior, petty crimes, and (really) bad boyfriends, but she’s starting to get her act together. Her father, Jim (Oliver Platt), reluctantly gets his family together for the long trip to NYC, perhaps sensing that this is the last time he will have his entire little family together. His wife Joy (Patricia Clarkson, who earned an Academy Award nomination and won several post season film awards for her performance here), is dying of breast cancer, and Joy and her daughter April have a history of terrible confrontations and hard feelings.

Although I didn’t really go for Hedges documentary-style or the film’s grainy, digital camera realism, the technique does bring the audience directly into the actors. It’s a visceral experience to get in so close to them; it takes sharing the emotions of the characters beyond merely being a vicarious experience. The performances are, for the most part, all good (Derek Luke and Sean Hayes are shaky), and makes being so intimate with the characters a rewarding experience. In fact, the actors don’t show their hands. They make the characters so real that you ignore the fact that they’re playing. It’s like being a fly on the wall or an invisible man privy to an intimate and intensely private, personal family drama.

So maybe Hedges (one of the screenwriters on About a Boy), made all the right choices, and whatever one might question about his choice of visual style, it makes what could have been a pedestrian, feel good, disease of the week, family melodrama, TV movie into a fine film.

2004 Golden Globes: 1 nomination: “Best Performance by an Actress in a Supporting Role in a Motion Picture” (Patricia Clarkson)