About this Movie: TRON: Legacy 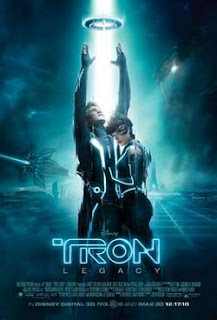 “TRON: Legacy” is a 3D high-tech adventure set in a digital world that’s unlike anything ever captured on the big screen. Sam Flynn (Garrett Hedlund), a rebellious 27-year-old, is haunted by the mysterious disappearance of his father Kevin Flynn (Oscar®- and Golden Globe®-winner Jeff Bridges), a man once known as the world’s leading video-game developer. When Sam investigates a strange signal sent from the old Flynn’s Arcade—a signal that could only come from his father—he finds himself pulled into a digital world where Kevin has been trapped for 20 years. With the help of the fearless warrior Quorra (Olivia Wilde), father and son embark on a life-and-death journey across a visually-stunning cyber universe—a universe created by Kevin himself that has become far more advanced with never-before-imagined vehicles, weapons, landscapes and a ruthless villain who will stop at nothing to prevent their escape. Presented in Disney Digital 3D™ and scored by Grammy® Award-winning electronic music duo Daft Punk, “TRON: Legacy” hits U.S. theaters on Dec. 17, 2010, in Disney Digital 3D™ and IMAX® 3D.

· Jeff Bridges, winner of both the Oscar® and Golden Globe® for his role in “Crazy Heart,” reprises the role of Kevin Flynn, which he originated in “TRON” (1982).

· Bruce Boxleitner reprises the roles of Alan Bradley and Tron, which he originated in “TRON” (1982).

· The world of “TRON: Legacy” has an exciting, pulsing vibe that sets its lifestyle apart from any other on or off the planet. From electric light suits to state-of-the-art hair and makeup, elements of the trend-setting world of “TRON: Legacy” are showing up on fashion runways, and companies such as Hurley, adidas, Oakley and Burton are featuring “TRON”-inspired lines targeted for the young male consumer in collaboration with Disney Consumer Products.

“TRON: Legacy” is a 3D high-tech adventure about a father and son (Jeff Bridges, Garrett Hedlund) who embark on a life-and-death journey of escape across a visually-stunning cyber universe that has become far more advanced and exceedingly dangerous.