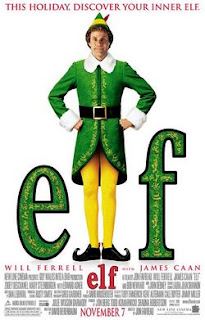 Will Ferrell is an excellent comic actor, a fine character actor, and simply a good actor. All his light fully shines in his star vehicle/Christmas fantasy, Elf. It’s a feel good film that definitely worked in making me feel good, and it’s so darn hilarious.

As an infant at an orphanage, Buddy (Will Ferrell) accidentally ended up being hauled back to the North Pole in Santa’s (Edward Asner) toy sack. After Buddy really begins to wreak havoc on the elf community because of his huge size and ungainly body, his Papa Elf (Bob Newhart) tells Buddy that he is not an elf, but is instead a human. Buddy travels to New York to meet his biological father, Walter (James Caan), who didn’t realize he had a love child. While Walter’s wife, Emily (Mary Steenburgen), and son, Michael (Daniel Tay), easily take to Buddy’s strange but delightful personality and ways, Walter is uncomfortable with Buddy. It’s a situation ripe for some of that Christmas magic.

Director/actor Jon Favreau’s film is very well made, from the topnotch cast of character actors to the magical sets that easily capture the mood of holiday times. Zooey Deschanel as Buddy’s love interest Jovie has a beautiful voice that makes any song ripe with Christmas joy. James Caan, Ed Asner, and Daniel Day also turn in solid, steady performances.

This is, however, Ferrell’s film. He’s hilarious, and I laughed much harder than I thought I would. He has a great comic sense, and he can really bury himself in silly characters. Most of all, he imbued Buddy the Elf with the Christmas spirit. I really felt the yuletide thing, and I’m a straight up Scrooge. Fans of Ferrell and lovers of Christmas movies will be delighted, and people who don’t go for that thing will still have fun. Elf is good.

Posted by Leroy Douresseaux at 11:38 AM