"Requiem for a Dream" Perhaps the Best Picture of 2000 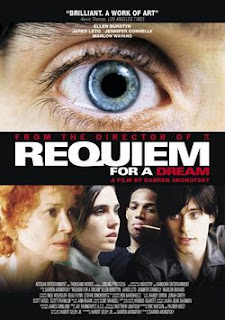 DRAMA/CRIME with elements of horror

With films like Gladiator, Crouching Tiger, Hidden Dragon, and Traffic taking all the attention in 2000, it was easy for a far superior work of cinematic art to get lost, but hopefully serious film watchers will discover Darren Aronofsky’s brilliantly filmed tale, Requiem for a Dream, on home video and DVD. Like Ang Lee’s work in Crouching Tiger, Aronofsky’s effort in his film is a dizzying achievement of directorial achievement, though on a smaller scale.

The film follows four drug addicts living in Brighton Beach, in the shadow of the crumbling Coney Island amusement park. A mother, her son, and his two friends find their drug-induced utopias slowly destroyed, as their addictions grow stronger. Sara Goldfarb (Ellen Burstyn) is a lonely television-obsessed widow, who gets a call that she has a chance to be a game show contestant. Determined to fit in the red dress she wore to her son’s high school graduation (when her husband was still alive and seemingly the last time the family publicly showed a happy face), she sees a doctor about loosing weight in 30 days. He gives her three prescriptions, a mixture of speed and downers. Initially, Sara can’t adjust to what the speed does to her, but she soon adjusts to the jittery feelings it gives her. However, when her body adjusts and starts to crave the high, she begins to take too many of the pills. Before, all her anxieties (growing older, grieving for her late husband, worrying about her son’s life, loneliness, etc.) and her increasing dependency on drugs cause her to go over the edge mentally.

Meanwhile, Harry Goldfarb (Jared Leto), his girlfriend Marion Silver (Jennifer Connelly), and his best pal Tyrone C. Love (Marlon Wayans) are taking heroin and cocaine. Harry and Tyrone also start to make a lot of money dealing drugs, but a gang war dries up the dope supply and drives up the prices, making it difficult for the trio to get their fix. That in turn drives each of them to the depths of their souls and into the bowels of a cruel society that exploits their need.

The four leads are simple incredible; this is career defining work. Ms. Burstyn opens her soul to absorb the text and transforms it into a character that emits truth. Then, even more difficult, she has to bare her soul to the viewer, and her performance is so fierce and the character’s situation so scary that the combination could scorch your soul. Any Caucasian actor that would have given the kind of performance that Marlon Wayans gives here would have had the pick of heavyweight dramatic roles offered to him after Requiem; instead, filmgoers can only see him in lowbrow comedies. Jennifer Connelly also comes into her own here. She’s eventually win an Oscar for her supporting role in A Beautiful Mind, but Requiem was where she showed her ability to deliver in intense dramas. Jared Leto, as usual, shows how passionate he is about acting, especially building a character. He eats up the screen, and his presence is like sunburst on film.

Aronofsky and his collaborators used a number of in-camera effects with digital special effects, special cameras, and editing technique to create a world of drug addiction, hard core criminal activity, and institutional callous cruelty that is real as the flesh on your bones. However, Aronofsky isn’t alone in his talents. There are any number of great directors and skilled filmmakers who use tricks and techniques to make visually appealing, surprising, and shocking films. What makes this work stand out is that Aronofsky went to great limits to make you feel. Thus, you’ll love it or hate because Aronofsky pushes you inside Requiem for a Dream, and you can’t sit back. The viewer has to be involved, and he or she has to care. A viewer has no choice but to have a strong feeling by what he or she experiences via this truly engaging and gripping movie.

Posted by Leroy Douresseaux at 8:10 AM