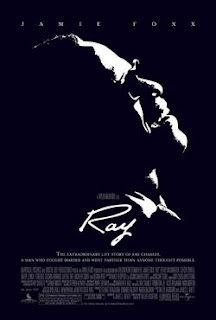 Biographical films, or biopics, as they are often called, often disappoint, not because they are so often historically inaccurate to varying degrees, but because they generally desperately try to fit a long life into about two hours and change of movie running time. Ray, director Taylor Hackford’s film about the life of the seminal blues, jazz, rock, and country recording artist, the late Ray Charles, doesn’t suffer from that malady.

Hackford and his co-writer, James L. White, smartly tackle the first two decades or so of Ray Charles’ (Jamie Foxx) career. They treat the story of his tragic childhood, his relationship with his mother Aretha Robinson (Sharon Warren), and the onset of his blindness in childhood as a short fable. In it, a mother teaches her son who is losing his sight to stand on his own feet because the world won’t pity him, and she also teaches him to learn to use his remaining senses after his sight is gone. When the time comes, the mother sends the son on his way to a special school where he can grow his immense musical talents and his gift of superb hearing. The rest of the movie focuses on Ray’s public career, which saw him crossing musical genres and styles with shocking ease to tremendous acclaim and success, and his tumultuous personal life that included infidelity and drug addiction.

Hackford and White understood that Ray Charles was a great man, and their film shows it. Hackford makes excellent use of Charles’ music and gives much time to his creative process and to his explosive live shows, be they in small clubs or large public auditoriums. The writers smartly distill Charles’ life into a few subplots (with his music being the main plot) that they extend throughout the film narrative.

Whereas many biopics seem to hop around a famous person’s life, Ray, with it’s focus on subplots that run the length of the film seems like one stable narrative with a definite beginning, middle, and end. The fact that his infidelity, drug use, creative process, and financial acumen are the focus for the length of the film gives the film the sense of being about one coherent and intact story. Ray’s music is the film, and the subplots follow his musical career giving it character, color, and drama.

As much as Hackford and White deserve all the credit for making a great biopic (one of the few great films about a famous black person), they needed an actor to play Ray Charles without the performance seeming like an imitation or something from a comic skit. Surprisingly, it’s a comedian and comic actor, Jamie Foxx, who takes the role and delivers a work of art. One of the great screen performances of the last two decades, Foxx could have easily and simply done a Ray Charles impersonation (which he may have done before for “In Living Colour,” the early 90’s Fox Network comedy sketch show). Instead, Foxx seems to channel the spirit of the classic Ray Charles and creates a separate, idealized, and fully realized character from whole cloth. Foxx’s performance is so credible that you may never once think that you’re watching an actor play Ray Charles.

For from being downbeat or arty, Ray is indeed a work of art, but most of all, it is an inspiring film that celebrates the life of a great musician by being a celebration of his great music and how he created it all. Awash, in the vibrant life of a performer and filled to the brim with great songs, Ray is a special movie meant for you to enjoy.