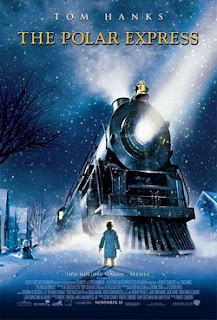 A boy, known in this story as Hero Boy (Tom Hanks/voice by Daryl Sabara), wants to believe in Santa Claus, but he’s old enough to start questioning the myths and traditions around Christmas. One Christmas Eve, a magical train named The Polar Express, arrives outside his home. Encouraged by the mysterious but friendly Conductor (Hanks), this doubting boy boards the train and heads towards the North Pole and Santa Claus’ (Hanks) home. There, he and two other children, Hero Girl (Nona Gaye) and Lonely Boy (Peter Scolari), embark on a journey of self-discovery.

I’m not crazy about the term, “instant classic.” However, I will apply it to the 2004 Christmas film, The Polar Express. Although it opened to mixed critical reviews and a less than stellar box office (compared to its budget), the film’s word of mouth kept its box office steady and strong on the way to becoming a blockbuster; the film even had a 2005 re-release to IMAX theatres. The Polar Express was one of the very best films of 2004 and will likely remain a popular Christmas film (certainly for me). One reason it will remain popular is because the film doesn’t look at Christmas from the point of view as a particular religious experience, but from the point of view as a holiday representing American can-do spirit, charity, and optimism. Like many popular Christmas film, it identifies with the notions that mark Christmas as a secular holiday, rather than a “holy day,” and the Christmas in this film is firmly rooted in American culture.

The look motion capture gave the film was one of the reasons some critics had mixed feelings about The Polar Express, with one critic going so far as to say that the characters’ eyes looked creepy. Motion capture does make the characters look a little more like real people than regular computer animation. Here, the process works because the motion capture-rendered characters blend in so well with all with the CG animated props, sets, and backdrops. Basically, regardless of what processes the filmmakers used, The Polar Express has a unique look – you’ve never seen anything like it. It’s amazing; it’s magical.

Quite a bit of credit should go to Oscar-winning director Robert Zemeckis (Forrest Gump) as the ringmaster of this film. His script, co-written by William Broyles, Jr. (Apollo 13), is tight and concisely uses very little dialogue to establish character, which in turn allows the audience more time to focus on the film’s dazzling look. As a director, Zemeckis blends poignant comedy, a wondrous sense of adventure, and impressive action sequences to make a riveting and heartwarming Christmas fable.

The film treats Christmas as a secular affair – the true meaning of Christmas is on the inside, the Conductor tells Hero Boy. We can truly experience the magic of Christmas if we believe in that magic – Santa Claus, his home at the North Pole, his elves, etc. – and age doesn’t matter, as long as we believe. Friendship, sharing, humility, providing leadership, and relying on and trusting in friends – those are Christmas ideals in which we can all believe regardless of creed. The Polar Express extols those ideals in a way that only the best Christmas films can.