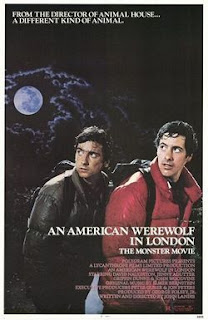 HORROR with some elements of comedy and romance

I remember when my late father had to actually go to the ticket window and physically purchase a ticket for me to see John Landis’s comedy/horror classic, An American Werewolf in London, because it was an R-rated movie. At the time, the local sheriff was forcing the theatre I frequented to abide by the MPAA ratings system. In the early 80’s, there were so many (fairly) hardcore teen-oriented films with strong sexual and violent themes, but I’m sure it was the sex that was bothering any influential locals who might have protested to the sheriff. I think the area was just starting to understand that the less attractive aspects of the sexual revolution were coming to visit us.

However, the “inconvenience” to my father was worth it, at least to me. An American Werewolf in London truly is a great horror film. I recently watched the movie in its entirety for the first time in over 20 years, and I still liked it as much as I did the first time. Even the special makeup effects by SFX maestro Rick Baker (who won an Oscar for his groundbreaking work here) for the first werewolf transformation that we see is as stunning, shocking, hilarious, frightening, and quite intense as it was when it first wowed audiences.

In the film two American college students, David Kessler (David Naughton) and Jack Goodman (Griffin Dunne), on a walking tour of England are attacked by a werewolf (Paddy Ryan) near a small rural village on the moors. David survives the attack, which the superstitious town folks hastily cover up. While recovering in a London hospital, David falls for his nurse, Alex Price (Jenny Agutter), and she takes him how so they can bop each other’s brains out. However, David receives a gruesome surprise when Jack returns as an undead apparition that only David can see. According to Jack, David carries a curse, and during the next full moon, he will transform into a werewolf and kill more people. Only David’s death will end the curse, free Jack’s soul, and save others from a brutal death in the jaws of the lycanthrope.

From Animal House to Blue Brothers, writer/director John Landis showed his gift for sheer lunacy, which he combined with a rich sense of humor. Granted that American Werewolf’s has some story holes (didn’t the neighbors hear all the racket David made the night he transforms and how did he leave Alex’s apartment after he transformed?), but the movie is such fun. It’s creepy, but not in a dreadful sort of way. It’s inventive, especially in the dream sequences and scenes where Jack and other undead visit David. It’s spectacular in Rick Baker’s surreal and near supernatural display of make up wizardry. Werewolf is hilarious and goofy; it has a B-movie spirit of winks and nudges with just enough gore to place it firmly in the pantheon of “serious” horror films.

I liked the acting because all the actors played their parts with such aplomb. Although I really liked David Naughton’s frantic portrayal of the doomed David, I also liked Griffin Dunne’s turn as the sarcastic and deadpan Jack. What more do I need to say? If you like horror movies, especially the one’s in which the comedy is intentional, and a good old-fashioned thriller, An American Werewolf in London is the film for you. It stood out amongst the flood of crass slasher films of its time, and it has a special quality that would make it stand out today. And I love Rick Baker even more!