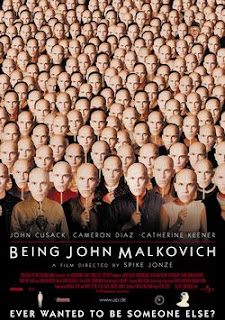 We’ve all read the reviews that describe particular movies as inventive, witty, original, unique, or some other hyperbole used to describe cinematic “brilliance.” Whether many of those movies deserved such praise is debatable, but Being John Malkovich is the real deal – original and stunningly, painfully unique. It’s not perfect, but it is so mind-numbingly brilliant: I’m not sure if I even know how to watch it again. I’m afraid to think what this film would be like if it were perfect.

Craig Schwartz (John Cusack) is a talented puppeteer with a failed career and an (seemingly) unhappy marriage to a frumpy animal lover (Cameron Diaz). When finances finally get too tight, Craig gets a job sorting files for the peculiar Dr. Lester (Orson Bean). He becomes hopelessly infatuated with Maxine (Catherine Keener), a sharp-tongued woman who works on the same floor. On one particular day of drudgery, Craig accidentally discovers a door to a portal that leads literally into the head of John Malkovich (John Malkovich). After Craig shares the secret with his wife Lottie, she can’t get enough of being John Malkovich, which, of course, leads to a maze of confusion and conflicting desires that both destroys and redefines relationships and creates new pairings.

Directed by award-winning and acclaimed music video director Spike Jonze, Malkovich defies an accurate description. It is alternately a fantasy, a comedy, a romance, and a drama; it is a story that both crosses and breaks genres. The film derives its brilliance from writer Charlie Kaufman; the script is a masterwork and one of the finest original screenplays of the last few decades. That Jonze could make a coherent and entertaining film of a story that it so philosophical, surrealistic, avant garde, and abstract foretells that the creativity seen in his music videos, he will carry over to film – lucky, lucky us.

The performances are all very good; everyone seemed more than up to the task of translating Kaufman’s eccentricity and brilliance to drama. Cusack once again affirms both his coolness and his talent. It’s pointless to praise Malkovich, and Ms. Keener only showed a more attentive audience the skill she’d already showed in films with smaller audiences. If no one will, I will toot Ms. Diaz’s talent. Her beauty merely accentuates her talent. She buried herself in this role as the frumpy lovelorn Lottie; she can do the method thing, so where’s the props?

Brilliant, smashing, exhilarating, ingenious, hilarious, hysterical, and wildly original – all have been said before, but these praises were made whole with Being John Malkovich. The film does seem to run out of energy late in the story, and the sci-fi/fantasy element seems to go overboard. Still, it is a film that has to be seen, if for no other reason than because Being John Malkovich is a fresh look at individuals and their need for and of other people. Run see this thing.