"She's the Man" Only Thinks its Clever 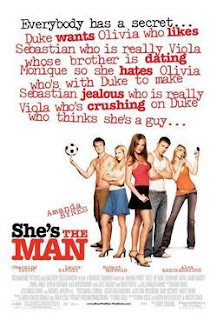 When her school discontinues the girl’s soccer team, Viola Johnson (Amanda Bynes) is determined to prove that she can make it on a boy’s team, especially after her boyfriend, soccer stud Justin (Robert Hoffman), mocks her. When her twin brother Sebastian (James Kirk) skips town to play with his band in London, Viola disguises herself as Sebastian and heads to his boarding school, Illyria Prep. There, Viola hopes that she can make the boy’s soccer team if her disguise convinces everyone at Illyria that she is indeed Sebastian. The Illyria boy’s soccer team is set to play her real school, Cornwall, in two weeks, and Viola would love to beat them and reveal to Justin that he lost to a team with a female player.

There are, however, complications galore. Viola falls in love with her handsome roommate, Duke Orsino (Channing Tatum), the captain of the Illyria team, and Duke certainly believes Sebastian is who he says he is because Duke doesn’t see through Viola in drag. Channing, however, is in love with Olivia (Laura Ramsey), but Olivia is in love with Sebastian who is really Viola in drag. As the day of the big game between Illyria and Cornwall approaches, the real Sebastian returns to school, and Viola in drag starts finding life a drag.

A work that is inspired by William Shakespeare can be anything from an adaptation that is derivative to a work that merely borrows a few ideas. It’s been so long since I’ve read Twelfth Night, but I remember enough to recognize what the 2006 high school romantic comedy, She’s the Man borrows. Shakespeare aside, She’s the Man is a slightly above average youth comedy. It has its moments – most of them derived from the lies and confusion brought about by mistaken identity and impersonation. There are some decent, if not good characters. It’s not that this film is not well directed so much as it is badly written. The writers may have borrowed from Shakespeare, but there’s not enough left of the Bard to make this a winning script. The narrative is too long, and the writers prop it on mishaps and identity-based gags rather than on good characters.

Since her days of romping on Nickelodeon, I’ve thought Amanda Bynes had the making of a fine comic actress. She is growing into one, and she takes this flimsy material and makes it worthy, though flawed. Channing Tatum (as Duke) is not a good actor, but he’s handsome and the camera mugs on him the way it does another acting challenged, but great movie star, Keanu Reeves. Tatum does his best to mimic the posturing, posing, and attitude of a modern young, urban black teen. There’s enough kink in his hair and enough tinge in his complexion to almost convince that he has… soul?

Posted by Leroy Douresseaux at 11:10 AM