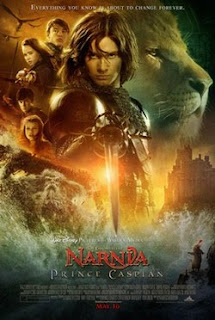 A year after their adventures in the world of Narnia, the Pevensie children: eldest child Peter (William Moseley), practical Susan (Anna Popplewell), second youngest child Edmund (Skandar Keynes), and youngest child Lucy (Georgie Henley), are back in London and struggling to adjust to their own mundane world. Meanwhile, in Narnia, 1,300 years have passed since the Pevensies left. In that time, the Telmarines, an ethnic group of humans, invaded the country of Narnia (the name of the world and of a country) and chased the mythological creatures of Narnia into hiding.

Prince Caspian (Ben Barnes), heir to the Telmarine throne, survives an assassination attempt by his evil uncle, King Miraz (Sergio Castellitto). Caspian convinces the Narnians to help him win his throne so that he can return their land. Meanwhile, the Pevensie children are traveling to boarding school when they are again transported to Narnia. They find Cair Paravel, the castle from where they once ruled the country of Narnia, in ruins. After meeting Caspian, they form a shaky alliance with the prince and the Narnians to defeat Miraz. They will need the help of the lion Aslan (voice of Liam Neeson), but he is nowhere to be found.

I enjoyed The Chronicles of Narnia: Prince Caspian much more than I did The Lion, the Witch and the Wardrobe. Prince Caspian is full of intrigue and fighting, bickering, and large battle scenes, whereas the first film was sometimes slow with a mechanical pace. The first half-hour to 45 minutes of the first film were largely dull, but Prince Caspian gets off to a roaring start. Prince Caspian is a medievalist-fantasy film like the Lord of the Rings movies, but not as intense. It is an adventure film with the characters running from one end of the countryside to the other, playing war. Prince Caspian is more spectacular than the original film, but like the first film it gets it messages and themes through, albeit in a more subtle fashion.

This is an especially well-directed film, and director Andrew Adamson deftly inserts the messages and themes (restoration and renewal) he and his co-screenwriters spread so evenly throughout the narrative. The story is not so black and white about what is right and wrong; this is not about good-evil and consequences of one’s actions and choices, etc. The story is more complex or more complicated than that. As Aslan says, things do not happen when people wish them, nor do things turn out exactly as people wish them. It is less about what might have happened and more about what we can make happen.

The Chronicles of Narnia: Prince Caspian sneaks its medicine – these lessons of faith, hope, perseverance, respect, and tolerance – in the sugar of breathtaking adventure. That is good enough to make this visit to Narnia an unforgettable one.