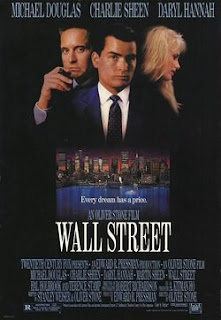 Although I was hot to see it when it was first released, I finally watched director Oliver Stone’s Wall Street – 23 years after it debuted in theatres. The film, which follows a young stockbroker’s adventures with an immoral corporate raider, is certainly one of Stone’s most popular films.

Wall Street opens in 1985, as Bud Fox (Charlie Sheen), a junior stockbroker (salesman) at Jackson Steinem & Co., struggles to get out of a rut and make it big. Fox wants to become involved with his hero, Gordon Gekko (Michael Douglas), the corporate raider and Wall Street player who is legendary for both his ruthlessness and his success. Bud’s father, Carl (Martin Sheen), an airline maintenance worker and union president, inadvertently provides his son with the information that captures Gekko’s interest. Gekko takes on Bud as a kind of apprentice and co-conspirator and helps him to become wealthy. Bud also gets a new girlfriend, an interior decorator named Darien (Daryl Hannah), a close friend of Gekko’s. Bud, however, begins to lose himself the deeper he goes in with Gekko.

Michael Douglas’ performance as Gordon Gekko is one of the best of the last quarter of the 20th century. Simply, it is magnificent. It is hard to believe that at the time of the film, Douglas was apparently considered a mediocre actor – more of a film producer than a performer. In Douglas’ hands, Gekko not only personifies “Wall Street greed,” but also the nature of greed and the competitive urge in humanity. Douglas as Gekko could make you think the phrase, “tour de force,” was created specifically to describe such an awesome and awe-inspiring performance. Like Raging Bull, Wall Street is a movie that enters the rarefied air of remarkable dramatic films made important because of great performances by lead actors.

Still, Wall Street is not completely about Michael Douglas. Charlie Sheen’s stiff-acting style actually makes Bud Fox the perfect dupe/foil for Gekko. Sheen’s (then) exceedingly fresh-looking baby face embodies America’s youth (relatively speaking), and his facial expressions are all about lust for success and money. At other times, Sheen depicts in Fox that inherent guilt that keeps our gluttony and baser appetites in check, for the most part.

Oliver Stone even draws out Wall Street’s religious subtext in scenes where the devilish Gekko mentors (or tempts) Fox on how to get ahead the unethical and illegal way. Stone and Douglas are quite good at presenting their vision of greed. Wall Street makes it look sexy – as if greed were really good, as Gekko says in his legendary monologue. Wall Street is still fantastic, and it may make you remember just how good Stone and Douglas were when they were at the top of their respective games.

Posted by Leroy Douresseaux at 10:14 AM