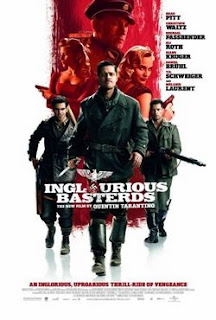 Apparently inspired by the 1978 Italian war movie, The Inglorious Bastards, Tarantino’s film opens in German-occupied France, where Shosanna Dreyfus (Mélanie Laurent) witnesses the execution of her family at the hand of Nazi Colonel Hans Landa (Christoph Waltz), a “Jew hunter” or “Jew detective” (which is the term Landa prefers). Meanwhile, somewhere else in Europe, American 1st Lieutenant Aldo Raine (Brad Pitt) organizes a group of Jewish-American soldiers to engage in targeted acts of retribution. Known to their enemy as, The Basterds, their mission is cause havoc and panic within the Third Reich by savagely killing Nazis and German servicemen. Raine tells his Basterds that being in this squad means they owe him a debt, and to pay it off, each man owes him 100 Nazi scalps.

Shosanna, who narrowly escaped Landa, fled to Paris, where four years later she has forged a new identity as Emmanuelle Mimieux, the owner and operator of a small cinema named La Gamaar. She catches the eye of a German marksman turned war hero, Fredrick Zoller (Daniel Brühl). In an attempt to impress her, Zoller convinces his superiors to hold a film premiere at La Gamaar. Meanwhile, Raine’s squad has joined German actress and undercover agent Bridget Von Hammersmark (Diane Kruger) on a mission to take down the leaders of The Third Reich – during the film premiere at La Gamaar. It seems that fates have converged at the cinema, as Shosanna, with the help of her projectionist boyfriend, Marcel (Jacky Ido), is poised to carry out her own plan of revenge on the Nazis.

What else can be said about it? Basterds is not a World War II movie; in fact, it really isn’t a war movie. It’s just a Tarantino movie that may be, as the filmmaker himself described it, a spaghetti western dressed up as a WW II movie. Of course, the additives are gleefully executed violence and snappy banter passing as dialogue. Inglourious Basterds is a ferocious and sadistic fantasy that revels in a World War II that doesn’t even come close to existing.

This is also an ensemble movie. The film never depicts the entire Basterds squad in action together. Each scene focuses on a small group of characters chosen from the larger ensemble. In a way, Inglourious Basterds could have been called “Shosanna’s Last Picture Show” or “Landa the Basterd” because the film is as much about them as it is about Raine and his Basterds. Shosanna is one of the few truly high-quality characters in this film, and actor Christoph Waltz creates one of the year’s best villains in Hans Landa. Just about all the others are less characters and more like character types that Tarantino probably stole…err…borrowed from other films.

Inglourious Basterds is merely glorious Tarantino. He is a highly skilled filmmaker with an encyclopedic knowledge of film, but he desires to make bloody pastiches of the violent action/martial arts/war/western films he so clearly loves. Inglourious Basterds is Quentin Tarantino’s version of a summer movie – entertaining, but loud, violent, and empty.

Posted by Leroy Douresseaux at 1:03 PM