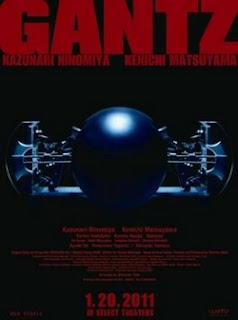 Tickets are available at participating theater box offices and online at http://www.fathomevents.com/. For a complete list of theater locations and prices, please visit the web site (theaters and participants are subject to change).

Presented by NCM Fathom and NEW PEOPLE, in association with Dark Horse Comics, GANTZ (English dubbed) tells the story of childhood friends Kei Kurono and Masaru Kato who are accidentally killed while trying to save another man’s life. Rather than find themselves in the hereafter, however, they awaken in a strange apartment in which they find a mysterious black orb they come to know as “GANTZ.” Along with similar abductees, they are provided with equipment and weaponry and manipulated into playing a kind of game in which they are sent back out to the greater world to do battle with alien beings, all while never quite knowing whether this game is an illusion or their new reality.

Ninomiya and Matsuyama are two of Japan’s biggest stars. Ninomiya, best known in America for his role in Clint Eastwood’s 2006 blockbuster, Letters from Iwo Jima, is both an actor and a singer. He is world-renowned as a member of the Japanese boy band “Arashi,” which topped Japan’s music charts in 2009 with the three best-selling singles. Matsuyama has been one of the most sought-after actors in Japanese film and has won several awards including Japanese Academy Awards Best New Actor (2007) and Most Popular Actor (2009). Matsuyama is recognized for his part as L in Death Note (2006), Death Note II: the Last Name (2006) and Death Note: L, change the WorLd (2008).

“GANTZ is the kind of kinetic action film that pushes the boundaries of the sci-fi genre,” said Seiji Horibuchi, founder of NEW PEOPLE. “We’re very excited to work with NCM Fathom and Dark Horse Comics to organize this special event and look forward to the property’s domestic popularity growing even more following this new release.”

“GANTZ offers a thrilling world that nobody has ever seen in live-action,” said Dan Diamond, vice president of NCM Fathom. “Incredibly popular in Japan as well as among American manga and anime enthusiasts, this new GANTZ rendition is sure to thrill audiences in local movie theaters around the country.”

About NEW PEOPLE
Based in San Francisco, California, NEW PEOPLE offers the latest films, art, fashion and retail brands from Japan through its unique entertainment destination as well as licensing and distribution of selective Japanese films. NEW PEOPLE strives to offer the most entertaining motion pictures straight from the "Kingdom of Pop" for audiences of all ages, especially the manga and anime generation, in North America. Some titles include DEATH NOTE, KAMIKAZE GIRLS, and THE TASTE OF TEA. For more information about films, please visit www.viz-pictures.com. To learn more about NEW PEOPLE in San Francisco, please visit http://www.newpeopleworld.com/.

About Dark Horse Comics
Since 1986, Dark Horse Comics has proven to be a solid example of how integrity and innovation can help broaden a unique storytelling medium and establish a small, homegrown company as an industry giant. The company is known for the progressive and creator friendly atmosphere it provides for writers and artists. In addition to publishing comics from top talent like Frank Miller, Mike Mignola, Neil Gaiman, Gerard Way and comics legend Will Eisner, Dark Horse has developed such successful characters as The Mask, Timecop, and SpyBoy. Additionally, their highly successful line of comics and products based on popular properties includes Star Wars, Indiana Jones, Buffy the Vampire Slayer, Aliens, Conan, Emily the Strange, Tim Burton, Trigun, Serenity and Domo. Today Dark Horse Comics is the largest independent comic-book publisher in the U.S. and is recognized as one of the world's leading publisher of licensed comics material.