"Hero" or "Ying Xiong," by Any Name is Great 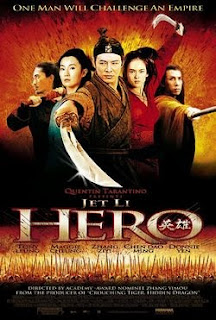 If you liked Crouching Tiger, Hidden Dragon, you may like Ying Xiong, better known by its English title, Hero. However, the two movies aren’t exactly alike. Crouching Tiger is an epic love story in which the romance is intertwined with political intrigue, betrayal and mystery. Hero is both a love story and a revenge tale, but both of those elements are ultimately submerged for a philosophical and spiritual message of national heritage. They are similar in this: I thought Crouching Tiger was by far and away the best film of 2000, and I think Hero is better than the vast majority of films that have been released domestically in the time since Hero first appeared theatrically in China (2002). Hero was also a 2003 Oscar® nominee for Best Foreign Language Film.

In the story, the Nameless Hero (Jet Li) seeks to murder the King of the province Qin (Daoming Chen). Decades earlier, the King’s forces massacred Nameless’ people in the province of Zhao as part of his campaign to unify the lands that would eventually become China. Nameless reaches the Emperor’s palace and shares the story of his journey up to that point. There is, however, another facet to the story. Nameless also takes on the challenge of defeating three swordsmen, Sky (Donnie Yen) and the assassin couple, Snow (Maggie Cheung) and Broken Sword (Tony Leung Chiu Wai), who also plot to kill the Emperor. Or as the Emperor of Qin discovers, is there more to the story of Nameless and three assassins than Nameless is telling the Emperor.

Although Hero will draw comparisons to the aforementioned Crouching Tiger, the film shares more with Akira Kurosawa’s Rashomon in terms of narrative and Wong Kar-Wai’s Ashes of Time in terms of its visual appearance and its spirit. Regardless of what other films it may resemble, Hero is an exemplary feat of filmmaking that is both thrilling and poignant. Awash in colors and emotion, Hero has beauty that will make your head swoon. The writing defines the lead characters so well, and the cast plays them with such furious conviction that you can’t help but live vicariously through them.

To enjoy such thrilling characters that you can’t help but feel their joy and sorrow, their triumph and noble resignation, or feel their boldness for martial confrontation and feel like you are in battle with them is what we ask of great movie characters. And to find such great characters in a movie that lives up to the promise of its players is an infrequent treat. To find a movie that delves into history and sends a message to the present that makes us realize the importance of the past is all the more rare.

Posted by Leroy Douresseaux at 1:18 PM