Wes Craven Brings Terror to the Sky in "Red Eye" 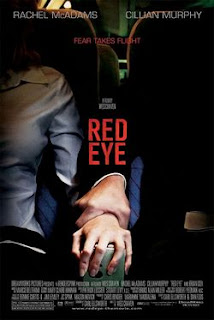 Wes Craven wants you to know that his new film, Red Eye, is not a horror film. I even saw him on a cable entertainment talk show where he emphatically stated that Red Eye was not a horror flick.

In the film, Lisa Reisert (Rachel McAdams), who hates to fly, has to take a plane, Fresh Air Flight 1019, from Texas (where she attended her grandmother’s funeral) back to Miami. Upon boarding her plane, Lisa is shocked to find that she’s seated next to Jackson Ripner (Cillian Murphy), a seemingly charming man with whom she earlier shared a drink. Once the plane is in the air, Jackson drops his flirtatious and charming façade and reveals to Lisa why he’s really on board the same plane with her. Jackson needs Lisa to use her pull as the desk manager of the popular Miami hotel, the Lux Atlantic, to move the Deputy Secretary of Homeland Security, Charles Keefe (Jack Scalia), to a room in the Lux where it will be easier to assassinate him (and his family). If Lisa doesn’t cooperate, Jackson’s comrade is waiting in car parked by her father’s home, waiting to kill dear old dad, Joe Reisert (Brian Cox). Trapped at 30,000 feet in air in the confines of the airplane and unable to summon help without endangering her father, Lisa has to figure away to thwart the ruthless Jackson, who never lets her out of his sight for very long.

While not a horror film, Red Eye is just more proof that Wes Craven knows how to give people chills and thrills. Red Eye is a nifty thriller that’s part Hitchcock (the first half) and part slasher film (the second half as Jackson pursues Lisa). The film is especially taut and tense during the plane sequences; those who don’t like flying will especially feel the shivers on the back on their necks and running down their spines. The wonderful camera work by Robert Yeoman (who has photographed all of Wes Anderson’s films) and Craven’s direction ably creates a sense of panic, doom, and claustrophobia. While Red Eye wears its B-movie credentials on its proverbial sleeves, Craven executes a premise into a suspense film that simply works – making a by-the-book plot a highly engaging cat-and-mouse drama – if only the story stayed on the plane.

Earlier in Summer 2005, Steven Spielberg turned sci-fi B-movie tropes into a grisly disaster film of high pedigree with War of the Worlds. Craven falls just short of making his own thriller into a rare breed suspense flick, and he shares the blame with the script. Neither he nor his screenwriter, Carl Ellsworth, do anything novel to keep Red Eye’s last act from becoming a video fare crime thriller. Red Eye is by no means a failure; it just fails at being great although the first half of the movie had the movie on the path to excellence. Ellsworth (who wrote Red Eye’s original story with former college classmate Dan Foos) was reportedly the only screenwriter to work on Red Eye’s script, a rarity in Hollywood, but in this case, perhaps it would have been best if at least one more writer put in his two cents worth.

Red Eye’s lightening pace can’t quite hide the ugly truth that the script turns what is an engaging adversary, Jackson Ripner, into nothing more than just another killer who in the film’s closing act overestimates himself. Cillian Murphy, sure to be a good character actor for some time to come, chews up the scenery as long as Jackson is on the airplane. When Red Eye’s script turns the story from a button-pushing psychological thriller into a killer-on-the-loose cheapie in the second half, Cillian Murphy’s Jackson looses his wicked charm and becomes a tiresome (and not too bright) ordinary home-invading assailant. It doesn’t help that the co-star Rachel McAdams is just another pretty face, and her acting, which has won her a prestigious Genie Award in her native country of Canada, delivers a functional performance here. In Red Eye, she lacks the tasty menace that made her such a sweet adversary for Lindsay Lohan in Mean Girls. Here, she’s just another spunky white girl running from a bad man with a knife – no better or worse than all the other white chicks who have run from monsters and killers for Craven since he first started making scary movies over three decades ago.

In the end, Red Eye works much more often than not. An edge-of-your-seat thriller with enough wit to make you laugh out loud, it’s a guaranteed winner for people who actually want to go to the theatre to see a movie, and it’ll also be a winning choice for those who are always looking for something good to rent from the video store.

Posted by Leroy Douresseaux at 1:38 PM