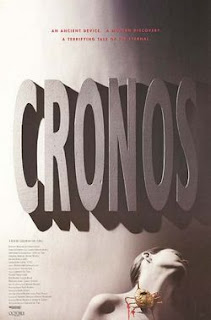 Cronos is writer/director Guillermo del Toro’s novel take on the vampire myth. The “Cronos Device” is a golden, elegant, mechanized scarab that grants the gift or curse of eternal life to those who would wear it. Inside the scarab is a tiny insect of unknown origin, and when the device stabs a mechanical pincer into the flesh of the wearer, injecting them with a substance from the insect that gives the wearer immortality.

Jesús Gris (Federico Luppi), an aging antique dealer, finds the scarab and inadvertently uses it, unaware that the device comes with instructions written on a set of ancient documents. Those are in the possession of Dieter de la Guardia (Claudio Brook), a wealthy industrialist slowly dying of some debilitating disease (likely cancer), a man who has been searching long and hard for the Cronos Device. Dieter uses his nephew and heir, Angel (Ron Perlman), as a heavy to obtain the device from Jesús, which leads to a protracted, bloody, and gruesome dispute between all parties involved in the struggle for immortality and the Cronos Device.

As a film, Cronos likely passes as a horror movie, but as a story, it’s more dark fantasy than anything else. Visually, Cronos has a striking, almost golden-hued or gilded gloomy look. The story is nice, and though he doesn’t pay off on the concept’s potential, del Toro creates a number of decidedly creepy images. Still, the golden earth tones, unique art direction, and mechanical effects make this a decidedly different kind of horror tale, worth viewing by those who take their movie watching seriously.